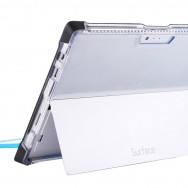 Initially, I went with the MoKo case for my Microsoft Surface Pro 3 because it was the style I had liked on my iPads. However, with the magnetic keyboard attached, when everything is closed, you end up with two flaps over the screen and it’s just too big and bulky. For my iPad, I have switched to a plastic shell that works in conjunction with the Apple magnetic cover and really like that minimal setup. I decided I wanted something similar for the Surface Pro 3 and the STM Dux Case appears to be it.

I really like this case. It is as minimal as you could want, but solidly protects the corners which are the most vulnerable parts of a tablet. It also protects the edges and the upper part of the back. The lower part of the back is exposed which allows the use of the Surface Pro’s kickstand. The edge of the case is flared, not flat nor rounded. I suspect that this helps direct the force of a drop away from the screen. Smart.

There is a YouTube video of someone dropping a Surface with this case, but I’m not sure how much comfort you can get from it. I do think, however, that it’s solidly built and will protect the tablet as much as any other good case. Definitely more than the MoKo.

Some folks dis this case because you can only plug the charging cable in one direction and the cable goes up instead of down. BFD. C’mom. That is no big deal. I’m sure they had reasons, perhaps this is a better structural design. I read another review and didn’t like the fact that only the upper back part is protected. Geezus. Really? How else are you going to use the built-in kickstand. Sure, the case could have it’s own stand, but that would just add bulk. Now, I will say that it is pricey–$65 on Amazon–but I think it was worth it.

If you are looking for a minimal case for your Surface Pro 3 with maximum and efficient protection, get the STM Dux. It rocks.

UPDATE:
2016-02-29: Recently, I decided to connect a monitor using the mini displayport and ran into an issue with the case. The opening is way too small to plug the cable into the port with the case attached. What made this more of a pain is that the case doesn’t just come off. You need a small Allen wrench to get it off. I ended up taking off the metal brace and leaving it off. The case seems to still stay on.