I took over 700 photos this weekend of some dogs at a rescue center. I whittled them down to 331 and of that chose 151 as my final set. I use Lightroom presets, but I’ve never applied one when importing. BOY! Have I been missing out! This saved me so much time. I have one “kitchen sink” preset that I concocted and use as a starting point on nearly all photos I take. I also put them in a Collection on import which saved me a little time, though not that much. 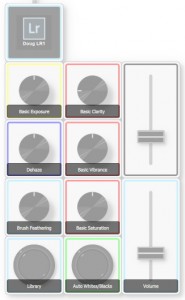 Anyways, I put my Palette through its paces and really loved using it. See the screenshot to see the controls I have set up.

My main go-to controls were Exposure and the Auto Whites/Blacks button. I really didn’t touch the others for these particular photos. As I mentioned in my post Palette Gear: Analog controls for Adobe Photoshop and Lightroom!, the Auto Whites/Blacks button executes a keyboard macro that performs the shift+click on the Whites and Blacks Lightroom sliders–a huge time saver.

If I were processing landscape photos, there would be more tweaking of the other parameters. In fact, I’ve decided I need two more dials to control Highlights and Shadows. LOL! I think I’ll put them below Exposure and move the existing two above the buttons. Additional Palette buttons are still out of stock, but I’m going to get a couple more of those eventually to execute other keyboard macros or shortcuts. I’m probably just going to shove the sliders in a drawer. They are pretty useless.