Somehow the Lightning cable connector tip snapped off inside my girlfriend’s iPad. At first, it seemed impossible to get the broken piece out of the slot since there is nothing to grab onto and the opening is terribly small.

A Google search came up with several possible solutions, some of which suggested super-gluing the broken piece to a cut ziptie or wires. I tried the ziptie+glue, but just couldn’t get a strong enough bond to yank the piece out. (On a side note, I didn’t have the same issue gluing my fingers together! ;-) Of course, you also have to be very careful not to get the glue elsewhere and ruin the connector. I do not recommend using glue. What worked for me involved something much more simple: a baby diaper safety pin. 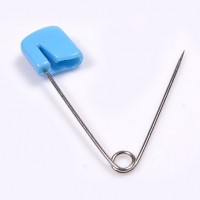 Diaper pins are long, strong and you can comfortably put some needed pressure on the point. I found a pack of them for a couple bucks at the grocery store in the baby diaper aisle. You’ll probably need more than one as they tend to get dull and bend as you use them.

One of the commenters suggested a seam ripper, which I think would be perfect since they have a nice handle allowing you to put some precise pressure when needed.

I also suggest you get some good tweezers that have a small pinching point. The hole is very small so larger tweezers will be of little help. One of the commenters used nail clippers to grab pieces sticking out. This might work well if you don’t press too hard and clip the piece off.

Start with one end and stab it with the pin. Try using the pin as a lever and see if the piece will just pop out. Mine did not do that, but depending on how hard it is lodged in there, this might work. Switch to the other side and try again.

If this doesn’t work, start digging away at the material from one side and alternate between sides. You’ll get bits of plastic and also the metal contacts from the connector. Use the tweezers to remove the debris. Again, be careful not to get too close to the long sides where the iPad’s contact are. Note that this is a somewhat slow process. I would guess it took me 10-15 minutes of digging.

Eventually, I got all of the interior part out and was left with only the outer metal frame. If you look at the picture to the left, you can see a little indentation on the side. There is one on each side of the connector and the iPad has tiny latches that hold the connector in. What you have to do and jam the pin in deep at the very end and pry one side of the U-shaped frame in. It is surprisingly strong and, thus, may take several tries, but it will bend in eventually. You may have to bend the other side before the piece comes out, but the second side will be easier.

Well, that’s it! I was certain the iPad was a lost cause, but fortunately I didn’t give up! Good luck!

If you found this information helpful, please considering donating to help me keep this blog alive. Any amount would be appreciated. Thanks!