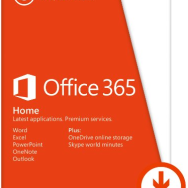 Giving in to subscription-based Office 365

Well, I’ve been getting by with Office 2007, but decided it was time to upgrade. I use the latest version at work and the small differences were just getting annoying.

Generally, I don’t like the idea of subscription-based software (yes, I’m talking to you Adobe!). The glaring exception is virus protection where you obviously want the latest version. With respect to Microsoft Office, historically, I would buy a copy and use it for 6-7 years. Although you can still buy a standalone copy of Office, Microsoft has jacked up the price. I need at least two or three licenses for my various computers and I bought my 3-PC version of Office 2007 for just $80. Now that price is only for one PC. The 3-PC version is $240!

I was able to get my first year of Office 365 for $66. Thereafter, its going to cost me $100 annually. The subscription includes licenses for 5 PCs and you also get 5 mobile licenses. While the iPad version of Excel is touted as “real Microsoft Excel,” it is not real enough for my tastes. I loaded a spreadsheet and it said it didn’t support certain features. Great… (A word of caution here. By default, the Excel iPad app saves automatically, so you could destroy your file if there are unsupported features and you are using virtual storage. The trick is to open a blank file and click the sync icon. Turn off the Autosave feature and saving works similar to the desktop. There are also online versions of the Office apps but they too are not full featured. For example, if your file is passworded, you cannot use the online version…yeah, why would you want to password a file saved online…)

As an added benefit, Outlook, PowerPoint and Access are included as well as 60 minutes/month of Skype calls and 1TB of OneDrive space, which weren’t included in the old Office Home version, but they are probably things I won’t use. I supposed the whole idea of always having the latest version is somewhat appealing.

So why not OpenOffice or some other alternative? Well, I’m a CPA and pretty much married to real Microsoft Excel.

Microsoft’s virtual storage product OneDrive is useful and 1TB of space is included. If you assign licenses to others in your household each one gets their own 1TB of space. That’s a nice benefit. The one thing I don’t like about OneDrive is that you really use it properly, you must log into Windows using your Windows Live account. I don’t know why I’m against this, but it just feels wrong. Still, the process to convert from the normal local login account is simple.

Once OneDrive is set up it integrates into Windows pretty seamlessly. It works like any physical drive. If you are familiar with Dropbox, it is similar. The difference is that with Dropbox you save to your Dropbox folder and that gets synced to the cloud in the background. OneDrive is more of a direct sync with the cloud; however, I believe I read somewhere that Microsoft is switching to the Dropbox method in Windows 10. Anyways, it’s not that big of a distinction. You can selectively set things to be available offline in case your Internet connection goes down.

What is kinda cool is that your OneDrive files will become available on your mobile app as well. But again, my recommendation is to turn off the Autosave feature on the mobile app just to be on the safe side.

So what does this mean for my Dropbox account? Some of my applications still use it for backing up and file transfers (mostly iOS) so I still use it, but in a much more limited manner. I don’t have it running on my desktop any longer. If I need files I just access them through my browser.

So the price of using Office has dramatically increased for me, but it’s my go-to application. On the plus side, with Office 365 I get the latest version, 5 licenses, 1TB of virtual storage per user, mobile and online apps, and 60 minutes/month of Skype calls. I would have rather things had stayed the same, but it sure feels like I’m getting a lot for my money.