I’ve been an Evernote user from practically their start, but time marches on and with the new device count and price changes, I thought it was time to try and probably move on to something else. Based on my research, Microsoft’s OneNote seemed to be the best alternative. This article covers my thought process of moving to OneNote as well as offering some tips on the migration process.

The two-device limit with the Basic plan just doesn’t work for me. If they had made it three, I probably could have worked with that. Sure, $3 a month is not much to pay, but with subscriptions to Adobe Creative Cloud, Microsoft Office 365, Spotify, etc., I’m not too keen on adding yet another subscription. I suppose they figured that you could always leverage the web version, but you give up some features that way. That said, I’d happily pony up for the paid license if I didn’t take into consideration what this all could really mean.

Personally, I think the abrupt and significant change smacks of a desperate company and one that is in deep financial trouble. Obviously, you can’t be a going concern if you give away your core product for free which Evernote has been doing since it’s inception. So, I can understand trimming the free plan to push people into paying for their service, but to also increase the price for their premium services by 30%-33%, seems to punish their loyal paying users and that’s what worries me. I think it’s a do-or-die test to see if Evernote is really a viable business.

Since I already had it installed with my Office 365 subscription, I figure I might as well jump in with both feet. If you don’t already have it installed, it’s a free download from the various App stores. It’s also part of Windows 10.

Microsoft has a nice OneNote Importer tool that will automatically import all (well most) of your Evernote notes into OneNote. You can download it from here. (Right now the Importer Tool is Windows only, but Microsoft is saying a Mac version is coming. Since Evernote is cloud-based, you could always just do the migration on a Windows machine as a one-time deal.)

I’m a fairly regular user of Evernote, but I never really took advantage of the advanced features. I probably accumulated about a thousand notes over the years. I use it for basic written notes and web clippings. I was pretty conscientious about tagging though to be honest I used the general text search more than tags for retrieving notes. Therein lies the first migration problem: OneNote does not support tags–well at least in the way Evernote implements them.

OneNote has tags, but they are not used as topical subject information, but more as general groupings. For example, there are several pre-defined ones like: To-Do, Important and Question. For topical subject organization, OneNote uses a hierarchical approach. Notes are grouped using tabs as compared to Evernote’s folder-list structure. The horizontal nature of tabs is more limited if you have a lot of note groups. I should note that you can set up custom tags to somewhat mimic Evernote’s tagging system, but it would be cumbersome to use with OneNotes UI. (Since the OneNote Importer doesn’t covert them in that manner, I suspect it isn’t recommended.)

Notes are called Pages in OneNote and there is one additional organizational level down called Subpages which are really just Pages that appear indented in the list of Pages. (Note: I’ll still refer to them as notes in this post.)

When you clip a webpage to Evernote, it saves the URL as an attribute of the note. OneNote does not have this feature and the importer doesn’t migrate the URL information. This could be a big or minor deal to you. I suppose as a fallback, if you really needed to know the URL, you could just go back and find the note in Evernote. It’s interesting that when you clip a web page from your browser using the OneNote browser tool, it appends a “Clipped from” URL reference at the bottom of the note. Too bad the importer does not replicate that.

Here are some suggestions I have before using the OneNote Importer:

If you use more than one Evernote account on the same machine, the OneNote Importer tool appears to use the last one that was logged into. Some information online said you had to import each notebook one at a time, but I found the current Importer allowed you to selectively process some or all Evernote notebooks in one pass. 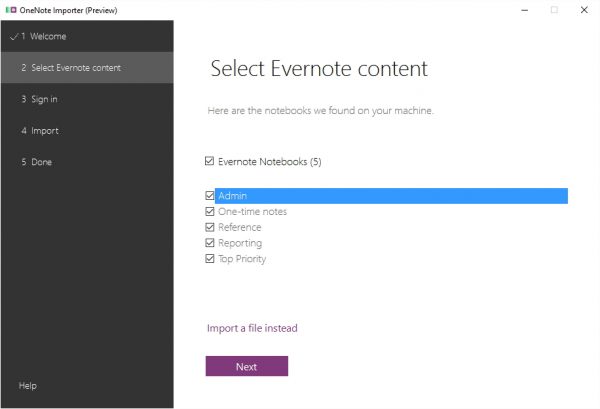 I highly recommend that you DO NOT enable the Use Evernote tags to organize content in OneNote option. It basically uses the first tag of each note as the tab name. If you have a ton of tags, you’ll end up with a nightmare of OneNote tabs. (If you really wanted to, you could re-tag all your Evernote notes and use this option, but if you have a ton of tags that would be a nightmare unto itself.) 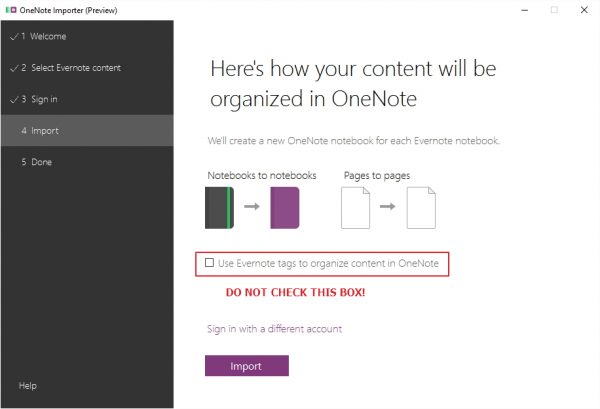 After you run the Importer, notebooks will be created corresponding to your Evernote notebooks. As I said earlier, Evernote notebook groups will be a thing of the past. Your notes will be placed in tabs of 100 notes each. You next step is to create logical tabs, effectively a single tag, and move the notes manually into the tabs. You can select multiple notes using typical Windows Ctrl and Shift keys and then move them as a group with your mouse or use the right-click context menu.

It’s a shame that it works this way. I really don’t understand why they didn’t create notebooks from the Evernote notebook groups and then create tabs using the notebook names. Of course, I probably ended up with a better result but it was a very tedious task.

OneNote uses OneDrive to sync to the cloud and between devices. When you first create a notebook, a corresponding OneNote file will be created in the Documents folder. If you later rename the notebook in OneNote, the OneDrive filename will remain the same. You can, however, manually rename the OneDrive file to keep them in sync. Make sure you do this in the web version of OneDrive.

After all is said and done, I’m very comfortable with the switch to OneNote. Note formatting actually seems better. I wasn’t really a big user of tags and my new tabs work just as well. The iOS mobile app versions are good too. I think what I found was that I really don’t use 99% of the notes I saved in Evernote, so there were only a handful of notes that I truly cared about.