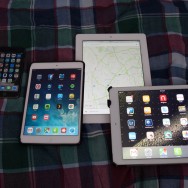 I was up until 4AM getting my new iPhone 6S up and running. It was the worst kind of nightmare: the kind when you’re awake and thus can’t wake up out of it!

I started by dutifully backing up my once trusty iPhone 5. When I plugged my new iPhone 6S into my PC, Windows acknowledged its presence, but not iTunes! I tried switching USB ports, changing cables, rebooting, etc. with no improvement. So, even though I had the latest version I uninstalled and reinstalled iTunes. Bingo. That did the trick. Little did I know that this was just the beginning of my troubles.

With the iPhone 6S now talking to iTunes, I went through the set-up process using a restore from my iPhone 5 backup. Things seemed to go well until iTunes just kinda hung there with a message saying it was “waiting for items to copy”. It stayed like this for hours! It sort of looked like things might be happening on my iPhone, but it was so slow it was hard to tell. In hindsight, I believe this message is telling you that iTunes is copying the apps to your phone, albeit at a snails pace.

I found this Apple support page that–I kid you not–says, “Depending on the amount of content, this could take a few hours or days to finish.” That’s right. DAYS. Really Apple??? That seems OK to you? How about at least a message that says this may take days or even better: a working progress bar–now there’s a thought!

I found that even with iTunes in this state I could select the iPhone 6S device, choose Books, toggle the selection of one item and click Apply. This would cause the process to copy things immediately. I did this several times, but eventually ended up at the “waiting for items to copy” again. I eventually gave up, rebooted and did another restore. This time I worked much better. I still got the “waiting for items to copy”, but it didn’t last too long. I think it was because most of the apps were already copied to the phone.

The only thing I can conclude by this ordeal is that the engineers at Apple do not use iPhones. It’s either that or they never restore from backups. ;-)

Next, I went through my apps and entered all of the logins and downloaded any needed media like Audible and Kindle books, etc. Spotify is always a pain after a restore if you have local files. Basically, you have to delete and reinstall it to get them working again. (See Fix Spotify local files problem after restoring from iPhone/iPad backup)

I’m trying something new on my phone, something that I’ve been doing on my iPads with success: I’m not using folders! Yes. No folders. (Well, maybe just a couple ;-) I group the icons by type, like audio, video, photos, programs, utilities, info, web, games, etc. I find that going in and out of folders gets tedious and paging through four or five screens is easier and faster. This is especially true since the iPhone 6S’s screen is so much larger than the 5’s.

So now my collection of Apple products includes an Apple TV, iPad 3, iPad Air, iPad Mini 2, iPhone 5 and an iPhone 6S. Sure glad I got rid of my Macbook Air or people might start accusing me of being an Apple fanboy! I really seriously considered jumping ship to Android this time, but as I went through my most used apps, there were just too many that benefited from being in the Apple ecosystem. Many of them use iCloud to keep data synced among my devices. I like being able to interchangeably use my iPad or iPhone without thinking about where the data is.

Now that my phone is all set to go, I’m looking forward to using it. It’s going to be a giant leap from my iPhone 5.

2015-09-28: I suspect that much my problem was caused by the amount of apps I have. My iPhone 5 was a 64GB model and it was probably half full. Most of the storage space was used by apps, not music or videos. It “seems” like when restoring, iTunes tries to download the apps rather than using the copies on the computer. I’ve talked to other people who didn’t have problems restoring, but they had mostly music and videos, not apps.

Yep. You would think that upgrading to a new iPhone would be made easier and more straight-forward. This time I have two phones to upgrade. My iPhone 6 Plus to 6s Plus and my wife’s 5c to 6 plus. This is the first time I am actually trying the restore from backup for my wife’s phone. And I had to back her 5c up and then when I tried to restore to the 6 Plus is said the restore I just did 2 seconds ago is corrupt. Nice. So, I am upgrading my wife’s 5c to latest iOS going to do a new backup and try to restore that one.

For my own phone, since I am a dev that sometimes puts on Beta versions of iOS for testing my apps, I have gotten used to losing almost everything, so to speak and re-installing and setting up mail etc from scratch, kind of gotten fast at that. I do that too to restart my phone cause you know how you start getting apps on there that you then never use again and the end up in backups and never get removed and then the phone has too much on it.

Thanks for the great post you Apple Fanboi! You need some Apple TVs. As a dev, I got lucky and got the new Apple TV4 to test. Not much installed on it as there isn’t the app store available yet.

Mark, my AppleTV 3 didn’t make the photo. Forgot about that lol