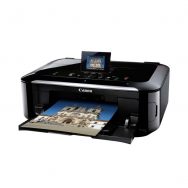 I have determined that my Asus RT-AC88U router is just not compatible with my Canon Pixma MG5320 over WiFi. I’ve read and tried several “solutions” I found on the net without any success. Honestly, the connection setup is not very complicated and as simple as connecting your phone to WiFi. Also, the printer works fine, if I connect using a wired USB cable.

From the printer’s side, things looked fine. The connection light was on and it seemed to acquired a legitimate IP address. However, from the router side, you could tell there were problems. The printer would usually not appear in the list of connected devices. After repeatedly powering the printer on and off, I could sometimes get it to appear, but you still couldn’t connect to it over WiFi from a computer.

I also tried setting up a dedicated IP address for the printer instead of using DHCP. Again, on the printer side, it acquired the proper IP address, but on the router side it still only showed up as a connected device intermittently. When it did show as connected, as before, you couldn’t actually connect to it from the computer.

I’ve got the latest firmwares installed on both devices. The only conclusion I can come to is that there is an inherent incompatibility between the Asus router and the Canon printer. I suppose that I really shouldn’t be too surprised since the printer is relatively old. Still, it seems kinda odd.

Oh well, the solution isn’t the cleanest and kinda kludgy, but it works.

I’ve the same problem with EPSON printers, THE SAME.
And also the same solution, i got the old router back so i could use the printers.

Other details:
PCs connected via Wi-Fi cannot even PING them.
Wireless cameras also suffer from the same problem, either DHCP or static IP.

hzablach, see if the solution on this post helps. https://www.seriouslytrivial.com/2017/11/17/asus-rt-ac88u-wifi-and-airprint-wireless-printer-problem-solution/