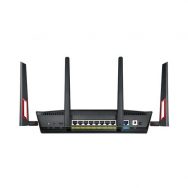 I finally got fed up tolerating my frequent connection issues with my Slingbox M1. (Note this is using a LAN and not even going through the internet.) The most likely suspect was my cheap-ass router, flashed with DD-WRT, so I decided to roll the dice and pony-up for a high-end gaming router. I figured this type of router would do a better job of keeping a steady connection between my Slingbox and PC over WiFi. After a lot of research, I settled on the ASUS RT-AC88U Wireless-AC3100 Dual Band Gigabit Router.

I really hate the exercise of replacing a router and redoing all of my port forwarding and static IP reservations, particularly when you change manufacturers. Settings are never where you think they should be and there are always nuances on how things are entered (e.g., entering a range of ports to forward). Documentation usually sucks as well. Fortunately, you generally only need to do this once and you’re done. I kept the SSID and passphrase the same so most of my WiFi devices connected to the new AP without additional work.

The RT-AC88U is G I G A N T I C ! Routers seem to be the only electronic device getting bigger rather than smaller. I ended up mounting it on my wall due to a lack of space. The trick for the RT-AC88U is that you have to remove two barely visible rubber inserts that cover the mounting holes. Also, you need to use relatively long screws because the bottom-rear of the device sticks out causing the bottom of the router not to be flush with the wall surface.

After getting it all set up, I ran the desktop Slingbox client and let it run for a while. No connection issues at all. Rock solid. Nice. Even file transfer speeds between my PC and NAS were much snappier. :-D

Not sure what peaked my curiosity, but I decided to run an internet speed check. The results came up and I couldn’t quite believe my eyes!

To put this in perspective, with my old router, I was getting maybe 20mb down and 1mb up! I knew that my internet plan from Time Warner Cable boasted speeds “up to 100mbps,” but I always figured that was theoretical and real world (i.e., my world) was much less. (Note that my PC is hard-wired to the router; I’m not using WiFi.) It never even occurred to me that a router could be so impactful on internet performance. I had always thought that any router was more than fast enough to handle any internet traffic. Well, apparently I was wrong. Dead wrong.

Sure the RT-AC88U was a pretty big investment, but boy was it worth it. To say I’m a happy camper would be the understatement of the century. So, if you aren’t getting close to the advertised internet speeds, you might want to evaluate your router. Of course, YMMV….