It’s been almost four years since I wrote about Shairport, a Windows AirPlay emulator and a lot has changed since then. Basically, Shairport turns your PC into an iOS AirPlay device so you can stream media from your iPhone or iPad to your computer. The biggest advancement is that it now allows you to record the stream!

I suppose technically it’s taking advantage of the “analog hole,” but in a digital way, if that makes any sense. Since I’m fine just streaming music using Spotify, I don’t have much need to save the songs as music files, but that said, it’s a pretty darn cool feature.

As it grabs the stream it uses the embedded AirPlay meta data to add the ID3 tags including album art! Quite impressive. Now although it appears to split the stream into individual songs I believe that it really just keeps track of the song transition point locations in the continuous stream.

I say this because if it doesn’t split at the right point, there is a feature that lets you see the wave form and move the transition point that divides the two songs after the fact. The actual split doesn’t occur until you export.

When you’re done recording, you can export the songs as MP3, FLAC WAV or m4a. You can save each recording session as a project; however, so far I have problems loading a project back into Shairport. More often than not I get a sharing violation error. Not a big deal though.

Now this all said, I will remind you that since Spotify allows you to save music offline there is really little need to go through this exercise. Of course, Shairport works with any AirPlay streamed media including YouTube so you may be able to think of other uses. 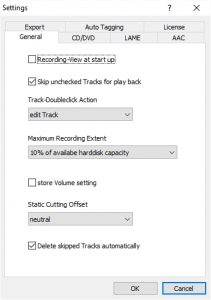 You’ll probably want to change some of the General default settings. First off, I suggest you uncheck the Recording-View at start-up option. When you first run Shairport, it records everything by default. However, if this option is not enabled, when you run Shairport, it will operate in a non-recording mode which shows only the left side of the interface. This is the way I use the program. I should note that when you’re in the recording view there seems to be no way to go back to the smaller non-recording view other than having this option off and restarting.

You’ll want to set the Maximum Recording Extent option to probably 10% of available harddisk capacity. Audio files are pretty small so this should be more than enough room for most. If it isn’t, use a higher setting. I also enable the Delete skipped Tracks automatically option. This will automatically delete incomplete tracks created when you skip songs.

The interface is also always on top, but if you click the small push pin on the main interface it will turn that function off.

The program doesn’t have an option to run at start-up so you’ll have to copy the program’s Desktop shortcut to your Startup folder. If you don’t know where that is, here’s a good tutorial on that.

Shairport is free, but will only record 10 minutes. If you want unlimited recording time you have to buy a plug-in and it will set you back a whole 10 bucks ;-). I won’t be recording, but I purchased the plug-in anyways to help support the author, Frank Friemel, for his hard work. You can download Shairport here.

Even if you don’t need the recording function, Shairport is great for streaming your iOS device to you computer speakers. I love it!