If you’ve never been to Texas, let me give you a brief overview of the freeway traffic system. Instead of freeways just being large roads without signals, Texas builds (usually) one-way “access roads” along each side which can themselves be several lanes wide. They also allow development along the shoulder of these access roads which means there are shopping centers, gas stations, restaurants, homes, driveways and other things all along them. Also, actual speeds on the access roads are often not much less than freeway speeds.

Don’t see the problem? Okay. Imagine someone built an In-and-Out burger on the shoulder of the busiest freeway in your town? How about a regional mall? Get it now? 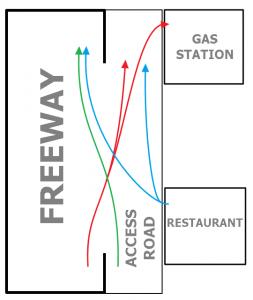 Oh yeah, if you miss your exit, since the access roads are one way, you can’t just get off at the next exit and turn right. You usually have to come back all the way around and try again…and don’t get me started on “turnarounds,” which are dedicated U-turn lanes…yeah, the fun never stops here.

This my friends is Texas freeways in a nutshell. It’s a fckin nightmare of a design and beyond stupid. The 26-lane wide freeway in Katy, Texas is a prime example of the folly.

It’s probably efficient for smaller implementations, but it doesn’t scale and the folks in charge don’t seem to care. They (obviously) just keep making ’em bigger…cuz that solves everything, right?