The Strayhearts and their unique drummer

Helped with another MMK9 dog adoption event yesterday at Random and was lucky enough to see this band, The Strayhearts. They were really good live and for me to say that says a lot since I’m overly critical. The lead singer, Mark Monaco, had a strong distinctive voice and the backup vocals were just as superb. The mix and instrumentation were awesome. Their website describes the band as, “All acoustic Americana band with 3 part harmonies. Waylon Jennings meets Mumford & Sons meets Zac Brown Band” and I would say that is pretty accurate. Note that the “acoustic” description just describes their use of acoustic instruments: guitars, stand-up bass, fiddle and drums. The term doesn’t infer a soft sound–these guys can rock in a southern country way. Their material included a lot of covers as well as a smattering of originals (I think, since I didn’t recognize them.) 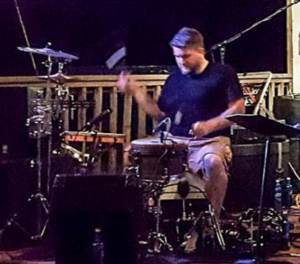 The drummer, Shane Haberstroh’s, kit really blew me away. He sat on a cajon which he used for the kick with a reversed pedal. Both his high-hat and splash were on his right as opposed to the traditional left side. He also had the weirdest snare. It appeared to be two pieces and the head looked stretched across the top like a conga instead of the typical metal hoop and lugs. He used brushes a lot…though not softly ;-) Pretty compact, efficient and effective set-up for a drum kit. Interestingly, he also sat at the very front of the stage…and I mean VERY front. He was so close that at one point, one leg of his stands went off the edge of the stage and he had to play one-handed as he held on for dear life with his other hand! HAHA very cool!

Check ’em out if you can. They are on Spotify, but I suggest you see them live.They play all around SA and their website seems up to date with appearance dates.