The RAVPower FileHub Plus is nothing short of amazing. It’s a wireless travel router and bridge, media streamer, SD Card reader and even a 6000mAh external battery! What’s even more amazing is that costs just $37.99 on Amazon right now!

I have to admit, I had pretty low expectations, but after playing with this thing for just a little while I can tell you this: mind officially blown.

It should go without saying that the first thing I did was change the admin and SSID passwords. :-) 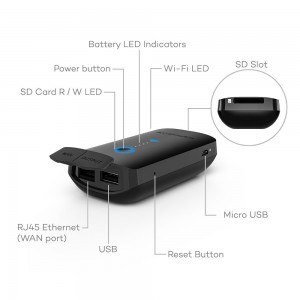 Using as a Router or Bridge

Although, the FileHub Plus can function as a typical wireless router, these days, it’s rare you need such a device when traveling since few places have a physical network Ethernet port to plug into. WiFi has pretty much replaced that.

What you do need is a wireless bridge that lets you connect to a WiFi hotspot and create a secondary hotspot of your own. This is pretty handy if you’re somewhere with a paid hotspot that limits the number of connected devices. Even if it doesn’t limit the connections, there is another big benefit: you only need to log into the paid hotspot from the FileHub Plus. Your own devices can keep using the same FileHub Plus WiFi settings. No need to keep connecting them to a new WiFi hotspot every time it changes.

With the FileHub Plus, setting up the bridge is dead simple. I did it on my iPad and used the browser-based user interface. You just go into the network settings, select the hotspot’s SSID, enter the password and save. That’s it. The FileHub Plus then becomes its own hotspot allowing you to share the connection with all your devices.

You can insert a full-size SD card or attach a USB external drive to the FileHub Plus. SDXC SD cards and USB-powered drives are supported. You can do basic file management between sources which includes the device you are running the UI on (e.g., your tablet or phone).

The FileHub Plus is great for backing up photos from an SD card to a portable hard drive in the field. It took about 22 minutes to transfer 282 raw files (7.8 GBs) taken on my Nikon D750 from a Samsung 64GB PRO UHS-I SDXC U3 Memory Card (Class 10) card to my 2TB portable drive. The documentation doesn’t mention if the USB port is 3.0 or 2.0, but I rather suspect 2.0. Still, that’s only a few seconds per photo which isn’t terrible.

Using the free iOS app (Android is also supported), I could stream MP4/MKVs and even AVIs to my iPad–support for the latter format being a big but welcome surprise. No Airplay support, but it does support Chromecast. (Note that AVIs will not work on the Chromecast even though they play on the iPad. MP4/MKVs work fine.) The device is pretty powerful, I had two different videos streaming without any gitches. It even remembers where you leave off on a video and lets you resume from that point! Pairing the FileHub Plus with a big SDXC card would be awesome for media sharing. (Incidentally, Amazon is selling a PNY 512GB SDXC card for $199. Just make sure you select Amazon as the seller.)

The manual is a bit skimpy and the user interface is terse. You’ll have to do some exploring and endure some trial and error. The online manual is much better than the printed one that comes with the device so make sure you download it. The English translation is entertaining at times. Here’s an example:

“Using a charger with an output higher than 1.0 A will damage the internal battery more or less.”

It isn’t documented, but there are icons at the bottom of the main screen that will eject your SD card or USB drive. Just tap the icon. It’s always a good idea to eject before physically disconnecting to avoid possible data corruption.

So far, I am extremely happy with the FileHub Plus. It will replace my TP-Link 703N running DD-WRT when I travel and I’ve got a big trip coming up next month. I plan to turn it on in my bag and watch videos on my iPad while on the plane. With the 512GB SDXC card, I’ll have plenty of variety!