A couple months ago, I blogged about an upcoming $180 analog control for computer program interfaces. The concept really intrigued me, although I wasn’t sure a single dial was really going to do it for me. Recently, I was listening to the Cool Photo Tools podcast and one of the hosts mentioned a product called Palette Gear which sounded more useful. Well, after doing a bit of research, I was quick to order one from the limited supply available at B&H.

First off, let me clarify one thing: PaletteGear.com is the website and their product is called “Palette.” Personally, I like the sound of Palette Gear better, but we’ll stick with the proper name.

Basically, Palette consists of the main “core”, plus any combination of three different types of control modules: a button, a dial and a slider. The modules attach to each other via strong magnets, so they snap and click together. You can arrange them in pretty much any configuration you like. They connect in a Daisy-chain fashion, so starting with the core, you need to make sure the male connector of each successive module is connected to the female connector of the proceeding one. The build quality seems quite high and they look like they will stand the test of time.

There is a small application that you install on your computer that allows you to assign each control module to a specific setting on the particular program’s user interface (UI). A group of settings is called a profile. Each profile, generally, works with one application at a time. So, for example, you can have one profile for, say, Photoshop, and another for Lightroom. Moreover, you might have a Lightroom profile for culling through your photos in the Library and another for the Develop module. It’s a very flexible system. It comes with several pre-defined profiles and you can get more on their website. Personally, I prefer creating my own custom profiles which is very easy. A word of warning here: if you create a custom profile you like, save it to your hard drive before closing its tab! 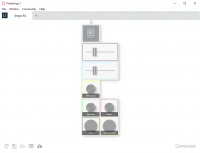 The Palette app will display a diagram of your modules. You can rename the modules and profiles, and even change their LED color. Using different colors helps you remember what the control does and more importantly looks very cool.

As you switch between applications, the app will automatically change the active profile to match the application, if one is loaded. The core has a small display screen on its face and will tell you which profile is active. Here’s a short video showing you how it works.

Currently, the following applications are supported: Lightroom, Photoshop, Illustrator, InDesign, After Effects, Premier Pro and Final Cut Pro. I would hazard to guess that as long as an application had a robust API, the developers could support it. Of course, since Palette can fire off keyboard shortcuts you can still have some control over applications and features that are not natively supported.

Besides the tactile experience you get using analog controls to change settings, it allows you to focus more closely on the image and the resulting changes. I grew up on analog controls, so I really enjoy the experience. It is somewhat like the difference between playing a game on a touchscreen tablet versus using a joystick on a game console.

I mostly live in Lightroom and here’s how I have my profile set up. I’ve got two button modules. One sends a Ctrl+Alt+1 which brings up the Lightroom Library. (I never understood why the L key doesn’t do that!) The other button is set to run a keyboard macro (I use MacroExpress Pro) which emulates holding the shift key while double-clicking the Whites and then Blacks sliders. This automatically sets my starting white and blacks points! Pretty sweet.

I have three dials. One is assigned to Exposure. Since small changes to Exposure can have such a dramatic effect, it’s really easy to get extremely precise adjustments. If you press down while rotating a dial, it increases the magnitude of the change. Initially, I was going to assign Highlights and Shadows to my two remaining dials, but since I use the shift-click shortcut, I decided to instead assign them to Clarity and Dehaze. It’s really nice not to have to dive down in the menu to get at Dehaze!

I really don’t care for the slider module at all. Although you might think they are good candidates for something like the Dehaze adjustment, in real life it doesn’t work that way. When the slider is activated, the UI settings will jump to wherever the slider is set. This is very problematic and I have yet to find anything really useful to assign my two sliders to.

You can order the modules individually, but there are three combination kits offered: the Starter ($199), the Expert ($299) and the Professional ($499). The Starter kit includes two buttons and one slider, but only a single dial so I wouldn’t recommend getting it. The Expert kit is the sweet spot and includes two buttons, two sliders and three dials. It’s a very usable collection of modules. The extra $200 for the big Professional kit gets you four buttons and six dials, which is a good deal if you think you want that many dials, even ignoring the four pretty useless sliders that are included.

Initially the app wasn’t working properly and the settings window wouldn’t come up properly. I contacted techsupport through the “Submit a request” link on their website, but after receiving no response for two days, I sent an email to support@palettegear.com. I got a quick response and was told to reinstall the firmware and that did the trick. From time to time, I’ve also had to restart the app to get it to work properly.

The App seems a little rudimentary, so there’s a lot of room for added features. For example, it would be cool to be able to assign pushing a dial to something else like a keyboard shortcut. Another idea would be to combine a button with a dial so that holding the button down would act like a Alt or Control key and give the dial a totally different function. If you could do this with two buttons, it would quadruple the ability of a single dial!

One annoying thing about the App is that if you change the settings for a control and then hit the X to close the settings window without click the Done button, it still changes the settings. In all other programs, hitting the X cancels your changes. You just need to make sure you’ve saved the version you want to keep so you can restore to those settings.

It’s probably my own obsessiveness, but it bothers me that the Palette lights stay on all the time. I’d like to be able to turn them off or, better yet, the device should go to sleep after a set time.

I have some pretty good Lightroom presets, so most of the time, I’m only adjusting a handful of things when I process a picture. This is the perfect scenario for Palette. I just LOVE the way it lets me dial in the perfect Exposure amount. I am probably OK with just the three dials, but I’m ordering three more to have some extra capacity. Admittedly, Palette is not a cheap accessory, but I’ve incorporated it nicely into my workflow.

If you are one of those Lightroom users who is tweaking every setting in Lightroom’s Develop module, you may not be a good candidate for Palette. It will be a pretty steep learning curve getting used to which settings use the Palette and which use the computer UI…unless you buy a ton of dial modules and have a giant desk and a giant wallet! Ha ha! Personally, for those people I’d recommend using presets more ;-)