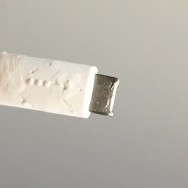 Somehow the Lightning cable connector tip snapped off inside my girlfriend’s iPad. At first, it seemed impossible to get the broken piece out of the slot since there is nothing to grab onto and the opening is terribly small.

A Google search came up with several possible solutions, some of which suggested super-gluing the broken piece to a cut ziptie or wires. I tried the ziptie+glue, but just couldn’t get a strong enough bond to yank the piece out. (On a side note, I didn’t have the same issue gluing my fingers together! ;-) Of course, you also have to be very careful not to get the glue elsewhere and ruin the connector. I do not recommend using glue. What worked for me involved something much more simple: a baby diaper safety pin.

You can try to use something like a sewing needle or even a thumbtack, but believe me, the diaper pin works the best because they are long, strong and you can comfortably put some needed pressure on the point. I found a pack of them for a couple bucks at the grocery store in the baby diaper aisle. You’ll probably need more than one as they tend to get dull and bend as you use them. I also suggest you get some good tweezers that have a small pinching point. The hole is very small so larger tweezers will be of little help. One of the commenters used nail clippers to grab pieces sticking out. Depending on your circumstances, this might work well if you don’t press too hard and clip the piece off.

Start with one end and stab it with the pin. Try using the pin as a lever and see if the piece will just pop out. Mine did not do that, but depending on how hard it is lodged in there, this might work. Switch to the other side and try again.

If this doesn’t work, start digging away at the material from one side and alternate between sides. You’ll get bits of plastic and also the metal contacts from the connector. Use the tweezers to remove the debris. Again, be careful not to get too close to the long sides where the iPad’s contact are. Note that this is a somewhat slow process. I would guess it took me 10-15 minutes of digging.

Eventually, I got all of the interior part out and was left with only the outer metal frame. If you look at the picture to the left, you can see a little indentation on the side. There is one on each side of the connector and the iPad has tiny latches that hold the connector in. What you have to do and jam the pin in deep at the very end and pry one side of the U-shaped frame in. It is surprisingly strong and, thus, may take several tries, but it will bend in eventually. You may have to bend the other side before the piece comes out, but the second side will be easier.

Well, that’s it! I was certain the iPad was a lost cause, but fortunately I didn’t give up! Good luck!

While we are talking about fixing cables, I thought I’d take this opportunity to share some of my favorite type of Lightning cables.

Well, I hope you found that helpful. Check ’em out.

I used a tool for unstitching threads from my wife’s sewing box. You get quite a strong needle, and you get a good grip. Looks like the perfect tool for this. I wouldn’t dare putting superglue in any holes in her iPad.

My iphone charger broke inside my charging port. So i googled ways to take it out, and saw many different responses. I actually took the time to read yours. I saw you said someone used nail clippers to pull it out. I did not do that at first. But surprisingly the nail clippers did work. It pulled out the broken charger piece. I just wanted to say thank you so much. ]

Uurgh… I did my best but no cigar. It appears that the charger broke equally just above the brackets. I am at a loss :/

I just fixed the same problem on my wife’s iPad. Someone on another thread suggested using the screwdriver in an eyeglasses repair kit. I took the flathead one, used one corner of it to pry up first one side of the frame and then the other side. It slipped a couple of times, but eventually it popped out. I plugged in a good (Apple) cable and everything works fine, with no glue gumming up the works ;)

I wanted to say a huge thank you for writing these instructions. I had the same issue happen to my iPhone and no idea how I might be able to get it repaired with the current covid 9 lockdown. A large needle allowed me to fish out the obstruction. More importantly, my phone is charging again as normal.

You are welcome Umar. I’m happy I was able to help. Stay safe.

Just tried it on my daughter’s iPhone and got it out in less than 2 minutes. Used a big pin like used for a corsage, then able to pull out with tweezers. With the COVID-19 scare, very glad this was an easy fix!

Thank you so so so much. It worked perfectly for me! Your detailed explanations were super useful in ensuring that the “operation” was a success. Thanks again with gratefulness!!

this was the only thing that worked for me.(mine had only the thin layer of metal inside) all i had to do was take what i think was something to do dots on nail polish and basically shake it around on one latch.then after only about 2 minutes of shaking around at the other it turned a full 90 degree and i just shook it out from there. my charger still works luckily and all of this is after digging at it for 3 hours before i looked this up.

Guess you were lucky it was only the metal part. Happy it worked for you Kaylin. Thanks for sharing!

I testify! This happened to me. I couldn’t find a diaper pin so I tried a safety pin but it was too weak and just kept bending. I brought the iPad to Apple and they tried with a couple different tools but they were unable to extract the pin. They suggested I try using glue to attach a plastic or metal stick to the pin fragment but that seemed unlikely. So I went to the hardware store and got some jewelers tools, which included a strong, thin, ice-pick type tool and a small pair of hemostats. With patience I was able to scrape enough of the metal out of the way and then gently pry (at an angle from the side) the fragment out a fraction of an inch to where the hemostat could grab it. Et Voila!

Just fixed son’s iphone by working out that this exact thing had happened with a cheapo charger. It looked fine inside so was confused for ages but realised that the metal frame must be wedged in there and it was! Thanks, you really helped me diagnose the problem.

You’re welcome Chrissy. Glad you got it fixed.

Thank you! Took all of 15 seconds using nail Clippers!!!

This was an amazing tip – I was having a proper stress and within 5 minutes of finding this, the broken part was out! Thank you so much

You’re welcome Ruth. Glad to be of help.

I tried the super glue method and unfortunately I think I got super glue on something I wasn’t suppose to. Is there any hope? Any advice would be amazing!

Hard to say. I would try digging out the connector area using something substantial like a sewing seam ripper. You’ve got nothing to lose. Just note the areas to stay away from as shown in my post. Good luck.

Thank you so much! At this point I was ready to give up but after seeing your post it helped me become more motivated, and with a sewing needle I found, with a little bit of work, managed to get it out! I am very greatful that I didn’t break my iPad and now it’s charging with a new charger!

Thank you so much.

You’re welcome Rebecca. Yeah, I think just understanding the inside of the connector gives you more confidence. Great job!

You can’t fix wires inside the cable, but can splice out the damaged section and solder the good parts together.

Once the work is done, it is very difficult to make the finished product look anything but ugly.

At the low price of a new lightning cable, it’s usually more effective to protect the cable instead of repairing it.

Alex, the post isn’t really about repairing the cable, but tells you how to get a broken off connector out of the Lightning port. :-)

Thanks also for the motivation. I did try this method along with a paper clip, but I it after I used the super glue method, so they did not work for me. I then decided to use 0.5 mm flat head screw driver with a hammer and this method actually did the trick for me. It only saved me $800 :)

Ah the “hammer method”. Nothing like some brute force LOL. It’s really about understanding what you’re dealing with. Glad it worked for you Shonda.

Thank you so much for posting this! My charger tip had broken off in my iPhone, and I was prepared to have to replace the damn phone, but thanks to your post, I was able to pop the tip casing off with a bobby pin! I stabbed it as best I could, and then dragged it up the side, and it popped out and slapped me in the cheek! I am now charging my phone with 5% battery and climbing! Your post saved me $800!!!!! Thank you!

Yesssss! Like Lisa, less than 5 minutes. I took a strong light to see inside the charge port to compare my iPhone (device with the issue) with my iPad to see what I was contending with. Tried the diaper pin trying to pierce the metal in the middle at the deepest part of the port. Closer inspection, I could see a “ridge” on the shorter end side where the charge bracket broke off. I took a careful jab at it and it dislodged immediately. Turned it upside down and the piece fell right out. Grateful for your post, THANK YOU!!

Incredible! I thought my phone was a lost cause and figured – Why not try? What more damage could I do? I’m so grateful for your tip! It took me less than 5 minutes and saved me a fortune. I can’t thank you enough!!!! All the best to you!

Glad to be of help Lisa. Your welcome.