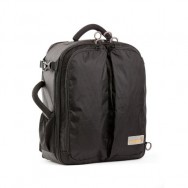 Air travel with the Kiboko 22L+

I recently posted about how much I love the Gura Gear Kiboko 22L+. Well, I finally got to take it on an airplane. My biggest worry was if it would fit in the under-seat space. I keep a lot of other stuff besides camera gear in it, so it needs to be readily accessible during the flight. The overhead storage really isn’t an option for my needs. It’s an inch shorter than the Ogio Renegade backpack that I usually use, so I was pretty sure it would fit. However, I encountered things that I did not anticipate.

The US Airways plane was a CRJ-900, a smaller commercial jet seating 76 people, so it was a good test for the bag as a carry-on. These planes won’t even accommodate a normal carry-on bag and they make you check it at the gate (no additional charge). Only smaller bags, like the Gura Gear Kiboko 22L+, are allowed on the plane.

I had the window seat and found that the Kiboko 22L+ did indeed fit beneath the seat in front of me going in lengthwise and only stuck out a couple inches. (See photo. Sorry about the glowing shoelaces!) It surprised me that compared to my backpack, there seemed to be less leg room even though the Kiboko 22L+ is an inch shorter. The reason is that a backpack slopes down where the Kiboko’s sides are vertical like a suitcase. There was still enough room for my shoes, but barely and I only wear a size 8. Any bigger shoes and I would have had to angle my feet.

Interestingly, the under-seat space is narrower for the window seat and I could not place the case sideways without creeping into the neighboring seat’s space. However, I lucked out and no one was seated next to me, so I was able to test the aisle seat. I found that the aisle seat has enough room to place it sideways! Since the width of the 22L+ is four inches less than the length, there is a lot more room for your feet. As such, I highly suggest getting the aisle seat when traveling with the Kiboko 22L+.

I got the same model CRJ-900 jet on the second leg of my trip, but you could tell it was much older. I found that although there was much more legroom, the under-seat vertical space was a couple inches less. It was tight but the Kiboko 22L+ still fit. Barely. I think if the bag was packed more fully vertically, it might not have. Note that although I didn’t try it, I’m certain it would easily fit in the overhead bin.

I think that on a larger jet, you won’t have any issues with the Kiboko 22L+, not that I encountered any showstoppers on the smaller aircraft.

Now, since the Kiboko 22L+ has long-large zippered compartments that are mostly accessed from the sides, it is problematic getting at things in flight. If you have it in length-wise, the things you want need to be near the top. It’s obviously easier if you’ve got it stowed sideways, but things still need to be on the side facing you and at the top still would be the best so you don’t have to unzip the entire side. If you are using the small jacket pocket make sure you insert handle-side in first as the pocket is on the opposite side.

I will have to admit that I missed the accessibility of the many pockets of my Ogio backpack, but it’s not designed to hold a bunch of camera gear; sometimes you just need the right tool for the job.

The Kiboko 22L+ fit under the seat on a small commercial jet without any significant problems. I do suggest getting the aisle seat so you can stow it sideways. If you need to access stuff while in flight, make sure you pack it for easy access to those items.