Recently, I was at the store admiring the slimness of the new iPad Air 2. Then I thought, “Wait a minute. My (first gen) iPad Air is barely larger!” What dawned on me is that since my iPad was always in a case, it seemed bulkier than the naked store-displayed ones.

Now, months ago, I went through a phase where I threw caution to the wind and used my iPad Air sans any type of case. That abruptly ended when I dropped it on a hard floor and the screen cracked. Even with a new screen, it’s still not exactly the same as new. The corner has a small ding and the Home button isn’t as smooth– constant reminders of my fumble and gamble. 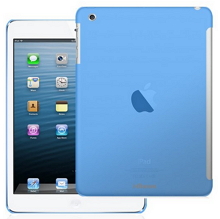 Anyways, I recently decided to get an iPad Mini. I got a super deal on a refurb’d 64GB/cellular iPad Mini 2 on the online Apple store. I wanted a case, but not something that would bulk it up like the one on my iPad Air. After thinking about it, I realized that the cover part was something I really only needed if the device was being packed in a bag or somewhere the screen needed protection. Typically, when a tablet falls, its the corner that hits and causes the screen to crack. To a great extent it just gets in the way if I’m holding the tablet in my hands. The answer was a two-piece solution: a slim wrap around case that would protect the corners and a removable front cover.

I ended up buying the i-Blason Apple iPad Mini with Retina Display Smart Cover Compatible Back Cover SoftGel TPU case ($17) and marrying it with the pricey official Apple Smart Cover ($39). The reason I went with the i-Blason, is that the reviews indicated that it did not have an issue working with the smart cover. The problem some cases like it have is that the lip that slips around the sides is too large and interferes with the magnetic closing feature.

I absolutely love this combination. While it’s not like using the iPad Mini without a case, the minimal added bulk is a reasonable trade-off for the protection it provides. If there is a downside, it’s that the smart cover is very limited as to the stand angles compared to the cover I usually use.