After three years of rarely using my Macbook Air, I decided it was time to return to a Windows machine. I never fully embraced the MacOS and usually ran Windows via Parallels anyways ;-). I bought the Macbook Air before the copycat Windows Ultrabooks existed and although I considered them now, ultimately, I decided on Microsoft’s Surface Pro 3. I had high hopes that it really was “A Tablet That Replaces Your Laptop,” as Microsoft claims. Sure, there are laptops that can also act like a tablet, but they are too bulky in my opinion.

I really wanted a touchscreen PC. Why Apple has fallen behind here is beyond me. It is so ironic; Apple started the “touch” revolution for goodness sakes! Yeah, I know Apple thinks we don’t want/need touch on a laptop (uhh we don’t need big screens on our phones either, right? ;-P ) but on many occasions I have tried to tap the screen on my laptop, so what does that tell you? It tells you it’s either intuitive or I’ve been trained. Either way, I will also tell you that after using touch on the Surface Pro 3, I’ll never go back!

Admittedly, the “click-click” Surface commercials are dumb and try too hard to be cool. They really do the Surface a disservice; the reality is that it’s really a well-crafted full-blown Windows PC which is reflected in the newer Surface Pro 3 commercials.

There are various models available, but the sweet spot is the Core i5/128GB SSD model ($999). I would have liked to have gone for the $799 Core i3 model, but I knew I couldn’t be happy with the puny 64GB hard drive. Sure, you can add up to a 128GB MicroSD, but I wanted to leave that option open for future needs.

It’s also important to understand that getting the i7 version may be a waste of money. There are reports that Microsoft throttles the i7 (and i5) CPUs back for heat and battery reasons, so the choice is mostly about the hard drive size, not processor specs.

The construction is very good and the screen is a gorgeous 2160 x 1440. It’s got a Mini DisplayPort and MicroSD port, but only a single USB 3.0 port! There’s a power button and a volume rocker on the sides. 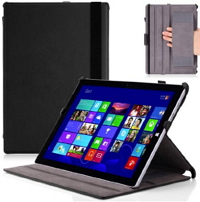 It’s nearly the same exact size as my 11″ Macbook Air, although it’s about 1/2 the thickness, so it fits in the same sleeve case I was using. I decided, however, to get a case similar to what I use on my iPad so it would be protected while I used it. This case is pretty cool because it will work even with the optional keyboard cover attached!

I was also happy to see that my Apple mouse, USB Ethernet adapter and various micro display adapters all worked with the Surface, at least after tracking down some drivers. The power adapter isn’t as sleek as the Apple ones, but it’s pretty close and also attaches magnetically. Guess they didn’t let the Xbox power adapter designers do the Surface’s ;-P

I should also note that there is a docking station available which looks pretty cool.

I’m a little disappointed that Microsoft didn’t see fit to offer a cellular option, but I’ve got a cellular iPad that will act as a WiFi hotspot, so I’m covered.

Generally, I don’t buy extended warranties. However, I am making an exception for the Surface Pro 3. Why? Well, according to the TechRepublic teardown of the Surface Pro 3, it is very difficult to repair and has a fragile glass screen. This means high repair costs and a higher possibility of cracking the screen. The problem is compounded by the fact that I am prone to dropping my devices. I’ve dropped my Macbook Air once, but my iPads and iPhone have seen the floor many times. So far, I’ve managed to only break one iPad screen, so I’ve been lucky. However, my fear is the Surface Pro 3 won’t be so forgiving.

Microsoft offers a 2-year warranty that includes accidental damage protection—even from drops and spills. Note that if you don’t get it at the time of purchase, you have 45 days from the date of purchase to buy it. At $150, I figure a 15% surcharge isn’t too bad for a little piece of mind.  I had made another exception to my “rule” and paid $249 for AppleCare for my Macbook Air and never used it, and that was for a much less fragile device.

I didn’t get the snap-on Type Cover keyboard ($130) because I wanted to use it more as a tablet than a laptop. I have found, however, that a keyboard is actually a must-have. Microsoft has a long way to go to match the on-screen virtual keyboards on the iPad. The Windows 8 virtual keyboards are just plain clunky and cumbersome. They  really gets in the way of the application you are trying to type into. Heck, the default keyboards don’t even have an Alt key! There are also no auto-correction/suggestion or Swype-like features. You really take this for granted using an iPad.

The Mouse Lives on

Although Microsoft has done a good job integrating “touch” into the OS, you will still be living in a hybrid world of new modern UI apps and classic desktop applications. There is no mouse-hover equivalent using touch and it’s amazing how often you really need that with classic desktop applications; your finger just can’t replace the exactness of a mouse pointer. Plus, in Windows, zooming isn’t ubiquitous like it is in iOS. The reality is that you’ll often need to use a mouse or the included stylus pen, but that depends mostly on the application you are running.

Modern UI Apps work fine, but can be confusing at first. You can recognize them because they do not have the typical titlebar and menu you are used to. You’ll be scratching your head when you try to close them.  Just remember these basic swipe actions:

-Bottom edge up: Shows the commands that would traditionally be in a top menu.
-Right edge left: Opens the charms.
-Left edge right: Displays and brings in open apps.
-Top edge down: Minimizes apps. Hold at the bottom to close.

One thing that’s a little bit of a pain is that unless you have the snap-on keyboard or a case, there is no place to put the stylus pen. However, I’ve discovered that there is a magnet along the edge near the power port that sort of holds the stylus, but it easily would fall off, so it’s really not a good solution.

On a side note, there are rumors that Windows 10 will include multi-touch gestures similar to MacOs. I hope so, because the Mac does it very well. It’s probably why Apple hasn’t embraced a touch screen yet, although I think it is a big mistake.

Also, Microsoft bought RDP iTap from HLW Software Development GmbH last year. This is a Windows remote desktop client app for iOS that rocks.  HLW nailed the gestures needed to emulate a mouse on a touch screen: single finger drag moves the mouse pointer; tap a second finger to left-click; tap two fingers to right-click; pinch and zoom works as you would expect. I am really hoping that Microsoft integrates this technology into Windows 10 which comes out next year. (They didn’t seem to buy iTap to integrate into their own iOS RDP app which is a piece of crap.)

Before we get into the Windows 8 Start screen, let’s talk about the traditional Windows desktop. What if you could group desktop icons and drag the individual icons or groups around in any order you wanted? What if you could adjust an icon’s size to make certain ones more prominent. What if some icons provided additional information or even news streams, like Vista sidebar gadgets? What if the desktop could scroll horizontally so you weren’t limited to just one screen’s worth of space? Well, that, my friends, is the Windows 8 Start screen. If you think of it this way, it actually makes sense and is very useful. It’s sort of like the old Quick Launch menu–jettisoned with Windows 7–but a graphically version.

I know there are people that use the desktop as their main way to launch things, although personally, I’ve always thought that having tons of icons on your desktop was just too disorganized and cluttered; having to hunt through them to find what you need just seems crazy. However, the Windows 8 Start screen is really a much better implementation and I really like it.

You can delete, group, and rearrange the Start screen tiles much like on an iPad. (Don’t worry about deleting the individual tiles because they are also in the lower (“Apps”) screen and can easily be added back.) Since for the most part I only use maybe a dozen programs regularly, I’m placing those right up front. Although I liked the animated tiles, like weather, sports and stock, they seem to use too much memory, so I unpinned them.

Don’t like the tile sizes? Just tap and hold the tile. Then choose Resize from the menu. Depending on the app, you’ll have various size choices. You can also toggle animated live title on/off here. Just tap Customize in the lower-right when done. You can even select multiple tiles and apply the same settings to them in one step. Nice!

The lower Apps screen is basically what used to be in the Start menu, but it’s laid out as a list. The first items are the ones that aren’t in folders and they are followed by the foldered ones which are grouped by their parent folder names. To place a tile on the upper Start menu just tap and hold it. A pin to Start option will appear at the bottom.

Incidentally, if you need to add a program or file to the Apps screen that isn’t already there, first create a shortcut for the file. Then move the shortcut to c:\ProgramData\Microsoft\Windows\Start Menu\Programs. (I actually created a folder here called FileShortcuts to keep them together, but that is not necessary.) The program will then appear on the Apps screen.

Although I blogged about how to get a Windows 7-like experience with Windows 8 (see Living with Windows 8), now that I understand the Start screen’s superior organizational features, I am not really missing the old Start button at all. In fact, I’ve totally switched over my desktop PC, as well, to using the Start screen instead of relying on Start8 which mimics the Windows 7 Start menu. I now realize you don’t need it: Embrace 8 people! ;-)

This little video from 2012 is the one that piqued my curiosity as to what the new Start screen was all about. Check it out.

The iPad still has a place

As much as third-party vendors try, the iPad isn’t really a laptop-replacement unless you have really limited uses; some things just require a full desktop OS. You know, those things where you say to yourself, “I’ll just wait to do that on my PC.” My clearest example is working on Excel files…it just doesn’t work well on a tablet. Lack of a real file system also makes some tasks hard to do or impossible on a tablet. Being able to use Chrome as my default browser on the Surface Pro 3 is really nice too.

Microsoft initially aimed the Surface at the iPad; however, they’ve finally figured out that it’s really a laptop replacement. A full desktop OS also allows things to work in concert with each other, something that is missing (by design) from the very sandboxed iOS environment.

This all said, my iPad Air will continue to be the device I reach for first. It is by far the best device to do the things I do most: videos, music, ebooks, email, Facebook, Pinterest, etc. However, the Surface Pro 3 will be close by to cover everything else.