Cutting the last board on a wooden fence 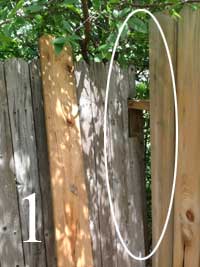 I am probably one of the least handy guys on the planet. However, when my girlfriend found that the folks that repaired her fence a while back didn’t fill the uneven gap where the new fence met the existing back one, I had the crazy idea that I could fix it!

Now, although I’m not very handy, I’ve watched the This Old House TV show for years on PBS. I looked at the problem and could almost hear Tom Silva explain how you put the board here, mark it there, transfer the mark over here, etc. etc. As luck would have it, behind some large bushes, the workers had left an unused board! So I figured all I needed was a pencil, a saw, nails and some sweat.

It ended up being as easy as I thought. I took some pictures to help anyone else that might encounter the same problem. 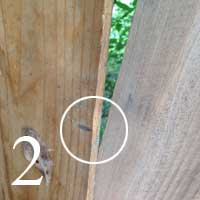 STEP 1: This is just a shot of the gap and the unused board.

STEP 2: I aligned the new board with the left side along the tilted back fence and made sure the top of the board was at the same height as the newer fence. I made a pencil mark just above the bottom of the gap on the right.

STEP 3: I then placed the new board on top of the last board of the newer fence and made sure the top was even. I made a mark just above the bottom of the gap on the left.

STEP 4: Next, I transferred both marks to the opposite side. I could have used a square tool, but I just eye-balled it. I put arrows on the new marks so I wouldn’t get things confused. Then I just drew a diagonal line between the two new marks and cut along that line.

STEP 5: A couple nails later and the job was done! 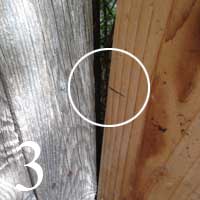 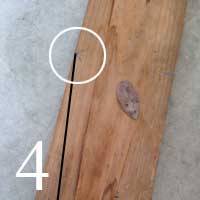 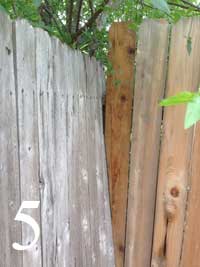