The Stock Markets: My Theory 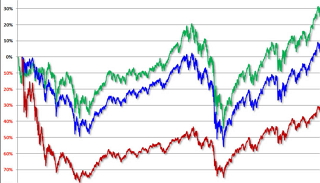 WARNING: Let me preface this blog post by saying that although I am a CPA, I am not a professional investor nor adviser. You should take all of this post with a huge grain of salt :-)

I have always wondered why the three major stock market indices (DOW, S&P and NASDAQ) always move in concert with each other, generally moving up and down in unison. How is this possible when each has a unique group of stocks? Aren’t there masses of stock pickers buying/selling individual stocks? It just doesn’t make sense…or does it?

The epiphany for me came after watching a comment made by one Wall St analyst–practically a throw-away comment, but a revelation to me. He basically said that it was just supply and demand. Supply and demand…now there’s a concept I can get my arms around. Simply put, if more money is invested in the market, more stocks are purchased and prices are bid up. If money is pulled out, more stocks are sold and prices fall.

Ignoring risky esoteric investments like commodities, oil, precious metals, and the like, investors have basically three main places to put their money: 1) the bank; 2) bond market; or 3) the stock market. Well, bank deposit accounts are paying practically nothing and bonds are not much better. To earn a decent rate of return, an investor has to take on more risk and stocks are about the only game in town with manageable risk.

The Ebb and Flow of Cash

Things are all run by computer these days, so it’s pretty easy to move investments in and out of stocks. My theory is that when stocks seem to have reached a short-term “high,” many investors pull some money out by selling some of their big gainers and wait for a perceived short-term “low” to reinvest.  The old “sell high buy low” motto. It’s somewhat of a self-fulfilling prophecy since as more and more money is pulled out, the rule of supply and demand causes prices to decline which encourages even more money to be pulled out.

At some point, of course, the out-flow of money begins to slow, prices stabilize and an equilibrium is reached. Investors  see this as a sign of a bottom and money flows back into the markets causing prices to rise again as they get bid up.

What can exacerbate the rise and fall of the tide are the “shorts.” To sell short is to sell stock that you don’t actually own (i.e., you borrow it). Of course, eventually they have to return the stock, but hope you can buy it at a price lower than you sold it for. So, if the stock price starts to climb unexpectedly, there can be panic buying of shares to “cover” the shorts which adds additional demand than would not otherwise exist.

So there is a continual rotation of money in and out of the markets like the tides of the ocean. If one could figure out what will drive the cycle, they would be rich. My thinking is more general: over the shot-term, do I expect more money to flow in or out of the markets? You can’t avoid the ups and downs of the cycle and people that try to time it will be wrong much of the time–the odds are against them.

Let’s talk about something I call a “truly disruptive event.” A prime example is what happened in 2008. Banks lent money to people who could not pay the money back. The banks then sold the loans at a profit to Wall St who in turn sold them to investors. When it became clear that investments were near worthless to the tune of trillions of dollars, the investment and financial systems collapsed. There was also the tech bubble in 2000. People were paying insane amounts for start-ups that eventually proved to be of little or no value. These were truly disruptive events. Real money was lost.

Something like employment or housing numbers coming in way below expectations or a negative FED comment are not truly disruptive. These are indicators that perhaps the economy is worse than expected, but there is no actual widespread financial impact. I feel that currently we can bounce back from dips caused by these type of things.

Emotions also play a big part in market movements. If things happen in the world, it’s not so much that the event has an actual impact on this stock or that stock, it’s the emotional belief that it will impact the markets in general. If its a negative belief, investors pull their money out and stocks go down. If positive, the opposite happens.

It is often said that future expectations are already priced-into the markets. What is meant by this is that the price of stocks, in general, in based on known and assumed future events. If assumptions change, then some adjustment in stock prices is warranted. Personally, I don’t buy into this 100%. Surveys, reports, Fed actions, etc. often happen as expected, yet the markets still react up or down. If it was truly priced-in, nothing would happen. In truth, it’s an imperfect system and nothing is really 100% priced-in.

History Doesn’t Have to Repeat

History is a poor predictor of the of the future. That’s why I don’t put much stock in analysis that uses moving averages of historical data. History is history and can only really explain how you got to the end of that history. This is also why I don’t believe in so-called technical support and resistance levels. It’s human nature to see patterns even if there is none. My future is not based on my last step, but my next step…which is unpredictable.

The “Commoditization” of Stocks

In the old days, stocks were reflective of the value of their underlying assets plus future cashflows: the fundamentals. This differed significantly from a commodity like wheat whose price is based on supply and demand.

Today, many stocks are priced more like a commodity. The fundamentals don’t matter as much as they used to. That’s why we have highly valued stocks for companies that have never turned a profit and aren’t expected to any time soon. Some may argue that its the value of their technology or development group. Well, that’s probably true for only a select few. For the majority, the math just doesn’t work. That said, you can still make money on these type of stocks as long as their is a bigger fool ready to buy it!

It used to be that people were investing in the business by owning stock in companies. You can’t really say that today with 100% conviction. It’s become legalized gambling to a great extent. It’s all about what the stock price will do, and less and less about what the company stands for or does.

Right now, things aren’t that bad and they are slowly improving, not getting worse. My view is that unless some unexpected truly disruptive event occurs, cash will continue to flow in and markets will continue to trade upwards, albeit erratically day to day. Where else is the money going to go…assuming it’s going to go somewhere?

That said, investors are cautiously optimistic right now, but it wouldn’t take much for a temporary panic to occur causing money to flow out of the stock markets. However, I would fully expect the money to eventually flow right back. It took five years to recover from the credit crisis, but the markets did despite all of the naysayers, which included me.

However, a truly disruptive event is all but guaranteed to happen at some point due to the government’s reckless borrowing with no plan to pay it down. The US is getting a temporary pass, but eventually interest rates are going to rise dramatically and the cost of borrowing our trillions and trillions of dollars of debt is going to be stifling. We aren’t going to be able to borrow our way out of the mess like we did in 2008. I believe this will be our next big crash. Not sure when it will happen or how we even recover from this fiasco. Until then, we can eat cake.