Ever since I started using my current PC as a server and leaving it on 24/7, it has been nothing but trouble–randomly crashing and rebooting. The machine has it’s roots in one I bought almost seven years ago, although I have upgraded the OS, hard drive and CPU since. I guess I’ve got enough use out of it and shouldn’t feel bad about replacing, right?

I knew I wanted to build my own rig so I could control the quality of components. My biggest application is Sonar X3, my DAW (digital audio workstation) software. It needs some CPU muscle, but it doesn’t need the graphics horsepower of a gaming machine. As such, integrated graphics is fine as long as dual monitors are supported. No need for a beefy video card which saves a lot of money. 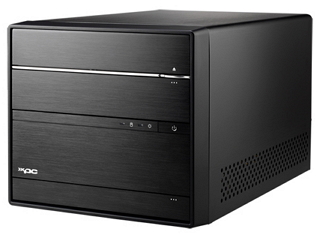 So basically my build required a case, motherboard, RAM, hard drive and optical drive. Initially, I was going to go with my tried-and-true ATX mini-tower build, but it seemed silly to have such a large case that was mostly empty. I was also going crazy trying to find a good ATX case after reading all the reviews.

Eventually I decided to go with a small form-factor Shuttle PC. Since the case and mobo are sold together, no need to find a suitable case. (I briefly considered some of the really tiny PCs, like the Intel NUCs, but dismissed them as being too limited. I gotta admit, though, that a small fanless PC would have been pretty neat!)

The Shuttle SZ87R6 is targeted for commercial applications and has a three-year warranty. As such, I’m expecting a rock-solid dependable machine that can stand up to 24/7 operation. It’s also got a beefy 500-watt PSU and dual-monitor support. Moreover, the Shuttle will hold a dual-slot PCI-Express X16 graphics card, should I ever need one.

The Intel Core i5-4670K seems to be the CPU of choice right now, with the  more expensive i7-4770K not really offering much more performance for the extra price.

With SSDs becoming so much more affordable, I opted for one in this build. Should be pretty speedy and quiet. Since this PC will be running 24/7, I chose the “workstation-class” Samsung 840 Pro Series 2.5″ 512GB SSD over the much cheaper EVO series version. The Pro also sports a 5-year warranty compared to the EVO’s 3-year. I admittedly splurged on the 512GB size, but since it will be the OS drive, it’s always nice to have some breathing room.

For the OS, I decided on Windows 8.1 Pro – 64-bit. Yeah, I know…but my reasoning is that it will be easier to eventually upgrade to Windows 9. If I went with Windows 7, I would be two versions behind. Also, it seems like Microsoft has (sort of) seen the errors of its ways and fixed some things in 8.1. Also, I am definitely going to install Start8 to get a more Windows 7-like experience. Incidentally, I got the Pro version so I can use Remote Desktop. (See also my post “Living with Windows 8“)

Although it doesn’t work specifically for a build based on a Shuttle, I found the PCPartsPicker.com site very helpful. It lets you pick your case, mobo, CPU, memory, etc. and prices it for you. It will even point out some incompatibilities, like a mobo with USB 3.0 connectors but a case that doesn’t have 3.0 external ports. You can create and save different lists and swap components in and out. I highly recommend it to anyone building their own rig.

Putting the components into the Shuttle was a breeze. I could have put it together without reading the instructions, but I followed them anyways. They were pretty well written with good illustrations. The Shuttle uses thumb screws for the outer shell and even the CPU cooling fan so it’s a breeze taking it apart.

I think the only place where I had to guess a little was in mounting the optical drive. The case is the type where the drive is hidden behind a spring-loaded door so it has to be mounted just right to work with the part that pushes the open button. It’s not that clear how much of the front needs to stick out to work with the hinged-door mechanism. I suggest you use the bracket holes that let you slide the drive back and forth so you can easily make adjustments once you have the drive cage in the case.

The case has 6 rear USB ports, 2 of which are 3.0, and I’d need every one of them. There are also several on the front, hidden behind a door. Luckily, there is an unused USB 2.0 header on the motherboard and I installed an adapter that added two more USB ports on the back. It just didn’t seem right plugging a mouse and keyboard into a 3.0 port, although it works just fine ;-)

This thing is wonderful. The SSD drive boots up as smooth as butter and is lightening fast too. It’s also near silent. With my tweaks to Windows 8, I’m avoiding most of its annoyances. Life is good.