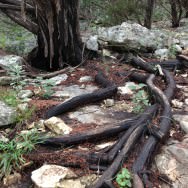 END_OF_DOCUMENT_TOKEN_TO_BE_REPLACED

[singlepic id=581 w=320 h=240 float=left]Ok, when did they start using the perfect bag for microwave popcorn??? Clear sides and an easy open bag. Why did it take they so long to do this? Genius! This is Orville Redenbacher’s Kettle Korn btw. 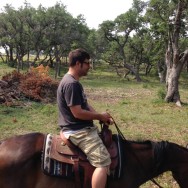 END_OF_DOCUMENT_TOKEN_TO_BE_REPLACED

I bought a Groupon for horseback riding at the Hollow Tree Ranch in New Braunfels. Relatively cool morning weather and it was a lot of fun! Highly recommended.

In the past I’ve either uploaded photos to Flickr or Picasa (now Google+) and had a Facebook app (RSS Graffiti) automatically post status updates to Facebook via RSS. (Of course I also posted some one-off photos directly to Facebook.) However, something went wonky recently and RSS Graffiti started posting old items to my timeline. Not good!

After researching alternatives, I finally decided to self-host my photos on SeriouslyTrival.com and write a blog post on new photo additions, which WordPress automatcally posts to Facebook.

I settled on NextGEN gallery, billed as “the world’s most popular WordPress gallery plugin.” Exporting from Google+ and reimporting to NextGEN was pretty easy. I had already had things grouped in albums, so I just mirrored that in NextGEN. (NOTE: If you do this, import oldest first or last least your latest photos last. This will pay dividends later since you can use that to automatically order things.)

I modded the NextGEN compact album view a bit to shorten the photo number display. I also modded the CSS to tighten up the font and added some height to the DIVs so they flowed smoother. I hate doing that since it makes upgrading harder, but the stock result just bugged me too much.

I also found that NextGEN short codes don’t play well with each other. For example, if you use nggtags and nggalbum on the same page, and a visitor clicks on an image from the nggtags short code, the nggalbum short code will still be evaluated and executed. (Note: having multiple instances of the same short code does not exhibit the same problem for some reason.)

The only solution I found was to create a separate subpage for each short code used, so I have separate nggtags, nggalbum and tagcloud pages–the latter two being subpages. I added hyperlinks at the top of the pages for navigation. Not the most elegant solution, but it works for now.

Uploading and Posting from iPhone

To upload iPhone photos to the website, I use the NextGEN iOS app. It’s pretty bare-bones, but does the job. Generally, I upload to an existing gallery named after the current year. This gallery is already part of an album included on my site’s Photo pages. I like to keep miscellaneous one-off photos in this album. (Events that have many photos, like vacations or holidays, get their own gallery, and I leave to handling on a desktop PC.)

To edit tags, you have to use the WordPress app which is a bit cumbersome on an iPhone. This feature is blatantly missing from the NextGEN app for some unknown reason even though it says you can in the app description. It may be better to wait until you can get to a real computer and browser, or even an iPad to edit tags.

I also purchased the FooBox WordPress plugin. FooBox mods the image display routines and does a better job at resizing. The UI is also much nicer and has a more obvious navigation UI.

The real reason I chose FooBox was it’s social site integration, specifically simple Facebook sharing from an iPhone. You will need to go through some tedious steps to generate a Facebook App ID, but its fairly well-documented. (Note: Use your site’s name for the “Display Name” and your site’s URL for the “Site URL” fields. Don’t use “GetFooBox” which is shown in the example steps.)

I popped for the $47 multi-site license since it had lifetime updates. The single site version is $27. I found a 20% discount coupon but noticed that there have been discounts as high as 45%, so it’s worth a Google search.

So here is my process to upload a picture to my site and then share on Facebook:

One of the added benefits is that I now have a kickass photo gallery system. Self-hosting my images also drives traffic to my site. I really hope that tag editing is added to the NextGEN iOS app soon. It’s not a showstopper, but it is annoying. I’m also looking at some way to add a comment system for photos, but FooBox may not play nice I fear.

I really like the FooBox image display, particularly on an iOS device and sharing on Facebook is drop-dead simple which was my goal.

Updates:
2013-05-19
Uploading a batch of images isn’t possible using the NextGEN app so had to resort to FTP. I found that Photogene would also scale the image prior to upload which is a real time-saver. What you have to do is create the gallery using the NextGEN app and then upload the images with Photogene. Remember that spaces in the gallery name are converted to dashes. Also, you’ll then have to go into the WordPress app and choose the Scan Folder for New Images option on the gallery. It’s a bit of a pain, but less so than uploading one by one.

2013-05-20
Make sure you enable the Activate permalinks in the NextGEN options. Otherwise, you won’t get a good thumbnail in any posts you share on Facebook. Also, if you use Featured Images, I would stop. They don’t work right with NextGEN. Supposedly, it will be fixed in version 2.0. If you want a specific image to represent the post, use a full path for the file in an IMAGE tag, which can even point to a NextGEN image (e.g., http://seriouslytrivial.com/wp-content/gallery/coolpics/IMG_0001.jpg). 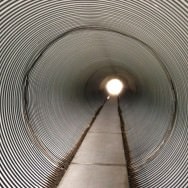 END_OF_DOCUMENT_TOKEN_TO_BE_REPLACED

UPDATE  2016-05-16: Spotify doesn’t seem to allow you to drag and drop anymore. Another way I’ve found to fix missing local songs is to create another local files source in Preferences and moving all of the local files to this new folder. Still seems to be hit and miss though.

One of the great things about Spotify is the way it lets you integrate local files into your playlists. These are typically MP3s you have, which are not on Spotify due to licensing restrictions. Once in awhile, things can get out of sync and even though the files exist, the song will appear ghosted in a playlist.

The fix is pretty simple. Just open an Explorer window with the list of your local files and drag the missing song to the Spotify playlist. You will create a new entry for the song, but it will also refresh the old entry. Then just delete the duplicate entry.

I did a lot of research before buying a Bluetooth headset for use in my Miata and settled on the Etymotic EtyBLU2. It’s been a few years since my last convertible and back then I was using Jawbone. The problem with the Jawbone was that although the person I was talking to could hear me pretty well, I couldn’t hear a thing because the eartip sat in the ear and not into the ear canal. I bought a third-party eartip that did, but I could never get the volume to work comfortably.

The EtyBLU2 is a totally different experience. First off, people I talk to don’t even know I’m in my car…and that’s with the top down! It also sits comfortably in my ear and I can hear perfectly. You couldn’t ask for more. It’s perfect.

Now, I will admit it looks like something a telemarketer would wear, but ya can’t argue with the results. You can take the windscreen off the boom mic, but I settled for the smaller of the two provided ones. It also comes with an assortment of eartips as well.

If you’ve got a convertible and need a Bluetooth headset, this is the one for you!