Almost exactly one year ago, I described how you can use Hellotxt.com to post to multiple Facebook accounts by using a Twitter account and having that get relayed into your secondary Facebook account. Not the most elegant solution, but it does work. Of course, I’m never satisfied so I continued the hunt. Recently I tried Posterous.com and actually got that to add multiple Facebook accounts; however, it sort of creates it’s own social site and I was just looking for a straight posting mechanism. 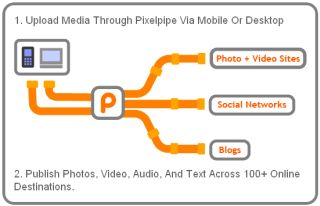 My most recent discovery is Pixelpipe. (It’s actually a re-discovery because I found I already had an account :-)) It is similar to Hellotxt in that it lets you send one post to multiple services, but Pixelpipe seems to have a much larger catalog of supported services, it calls “pipes”.

The pipe that suits my particular need is plain ol email. Yup, Pixelpipe will send your post to an email address. Sounds boring and is easily overlooked, but ended up being the Holy Grail for me. Since Facebook lets you update your status via email–voila!–put the two together and you can update multiple Facebook accounts using Pixelpipe!

All you need to do is determine your special Facebook status update email address. Just login to Facebook and then go to http://Facebook.com/mobile. Under “Upload via email” you’ll see it. The subject line is used as the status text and you can attach images. Keep in mind, of course, that you really need to protect this email address since it opens up the door for anyone to update your Facebook status!

On a side note, you can reset this email address to a new one, but it’s kinda hidden. You have to go to http://m.facebook.com/upload.php and click the Reset Address link.

I sort of like this method of updating my Facebook status because it doesn’t require me to give permissions to a third-party application. Also, it is purely one way.

Pixelpipe supports a plethora of other social sites including, of course, the ubiquitous Twitter. The interesting thing is that I came across Pixelpipe because it is listed in the Hellotxt applications. Guess they don’t see it as a competitor.

Note that I was able to actually add two Facebook “pipes”, but it’s a little tricky. When you authenticate your Facebook account in Pixelpipe (or even Posterous), you are also logging into your Facebook account. As such, you have to open the Facebook page in your browser (press F5 to do a page reload to be sure) and log off before authenticating the second Facebook account. (If you don’t know how to log out, click on Account in the top-right corner and choose Logout from the drop-down menu.) My suspicion is that although this works, it’s an unintended result. I say this because if you later change the settings, you may see the warnings that you need to reauthorize your Facebook accounts.

Pixelpipe has a decent iPhone app too. It’s a little confusing at first. Initially, the app opens on its Media page and you see all the photos on your phone. It looks like the app wants you to upload *all* your pics somewhere, because there is a large scary green button that says Upload All. To just post a new status, tap the Post button at the bottom.

The images are uploaded to your Facebook photos and, by default, somewhere on Pixelpipe for linked Twitter pics. (Note that you can set images to automatically scale down prior to uploading in the Settings, which is a nice feature–no reason to be posting 5MP images usually.) If you have, say, Flickr added as a pipe, you can have your Twitter pics hosted there instead of on Pixelpipe. In other words, the URL-shortened link will point to Flickr. Other image sites are supported.

The app is not compatible with the iPad for some reason, but you can just use the website page on the iPad.

So far I’m very happy with Pixelpipe, but am kinda sad to stop using Hellotxt. Of course, I’m fickle and who knows what I’ll be using tomorrow!

UPDATE 2010-08-05:
I tried setting up two email Pixelpipe services pointing to two different Facebook accounts, but this stopped working today. Facebook must have some sort of spam detection that ignores duplicate posts to multiple emails. I guess that makes sense. My solution is to have one actual Facebook service and one email to Facebook. That should be ok, I hope.