Connecting a laptop to a hotel TV 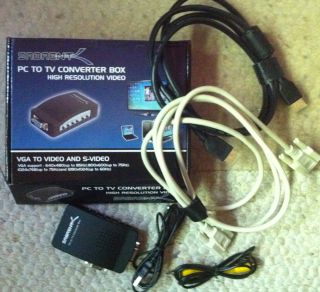 Connecting a laptop to a TV has never been really straightforward. What’s worse, if you want to connect to a hotel TV while traveling, you can’t depend on a particular input. My HP tm2 has HDMI and VGA outs, so if I’m lucky, I can use one of those. If not, I figure that good ol composite gives me the highest likelihood of success. Of course, analog component would be a better picture, but lugging around the proper converter and cables just seemed too much and I’d still need composite just in case!

I reported earlier that I was getting the Sabrent PC to TV Converter Box. I finally got it and have done some initial testing. (The Sabrent is available on Amazon for a mere $32.99.) It’s a tiny device and is USB powered–how perfect!

At first the picture was black and white and fuzzy. The dip switches were set for PAL by default (both up), so all I had to do was flip them to the down position and voila, it worked! It supports resolutions of 640×480, 800×600, 1024×768 and even 1280×1024; however, since these far exceed the capabilities of composite video, as long as your laptop works in one of the supported resolutions, you are good to go. As a test, I hooked this to the composite input of my 52″ HDTV and was pretty amazed at the quality. Hulu video was pretty darn clear.

I’m able to fit in the Sabrent box, a 6′ HDMI cable, a 5′ VGA, a composite cable, and the USB power cable all in the box the Sabrent came in. (Note that it comes with all of that plus an s-video, but not the HDMI.) I’m going on vacation in a few weeks and I’ll report back how it works. I know the hotel has flatscreens, but that doesn’t necessarily mean HDMI. Early HDTVs only had analog component.