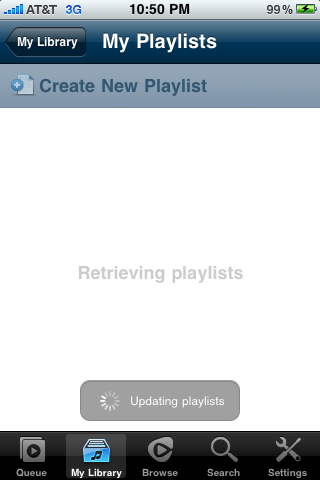 Having problems updating your playlists on the iPhone Rhapsody app? I was. The message “Updating playlists” would just sit there and never go away. It appears that the problem relates to Dynamic Playlists. These are special playlists that change over time, like “Top 20 Pop/Rock Tracks”. It appears that the iPhone Rhapsody app chokes on these. If you remove them using the desktop app, your playlists will update. You can identify them by the icon next to the playlist name. It’s a two arrows in the circle instead of the musical notes.

The other thing to avoid is any “imported” songs in a playlist. These are songs not from the Rhapsody subscription, but ones actually on your PC hard drive. These will say “Imported” in the Track Type column in the list of songs in a playlist on the desktop application. These will not freeze the update, but the playlists will not show up on the iPhone app.

Another problem which I haven’t found a fix for is just keeping my library in sync between the iPhone app, the website, and the desktop app. I wish Rhapsody had a formal “Update Playlists” button, but it doesn’t. It seems to try to update if you close the app down and restart–actually kill the iPhone task, assuming you are using iOS4. Generally, the syncing works fine, but from time to time they get out of sync. Songs will appear in one or the other and never correct itself. The only thing that seems to work is deleting the c:Program FilesRhapsodyradfile.rcf file. I just had to do that and had to start all over re-creating my library!

I wish there was some sort of back up option so you could restore your library to some point, but I suppose that will never happen. I think the whole DRM/licensing mess just makes this harder than it needs to me. Oh well. I have come to the conclusion that I cannot depend on Rhapsody for my main music source and must continue to rely on actual files on my iPhone. I’ll still use Rhapsody to discover new artists and songs, as well as access old catalog stuff. However, I’ll use it in a more dynamic fashion and not care if the library or playlists get lost. Not the perfect solution, but not the worst scenario either.

Another limitation of using a subscription service like Rhapsody is when something isn’t in their catalog. If you’ve got the CD or MP3s, you can import it into the desktop environment, but you are SOL on the mobile client.

Still, I love Rhapsody and recommend it highly. Being able to access nearly any song I want on the fly is wonderful. The new background playing ability on the iPhone is awesome.