Got my iPhone 4 via FedEx. The 1-1/2 hours pre-ordering online was worth it. So far the darn thing is awesome. I love it. Here are some notes on my experience: 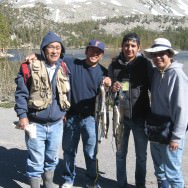 END_OF_DOCUMENT_TOKEN_TO_BE_REPLACED

Yes, I drank the Kool Aid this morning…about 2:30am. I had my Touch next to my bed with the alarm set to a strategic time and the Apple store page ready for quick reloading. It was about 1am, i think, when the page loaded and i knew it was time to get up and join the fun (aka chaos). Initially I tried Chrome, but switched to IE and FF thinking I didn’t want to run into any compatibility issues.

I saw the Twitter meltdown, but since their API was still working, I could read the tweets real-time on Google as I sat and patiently (but sleepily) attempted the pre-order process. Was I surprised that the Apple store site couldn’t handle the flood of traffic? No. Particularly when they had to interact with AT&T to get the upgrade eligibility, phone plans, etc. Was I surprised that the AT&T site allowed you to click Pre-order but only had the iPhone 3G models. No. AT&T is just lame.

Sure, I was aggravated that I had to enter my phone number, zip code, and last 4 digits of my social countless times, but I thought about all of the hundreds of thousands, if not millions, of people trying to do the same exact thing and I understood why there were problems. C’mon, even Twitter with it’s 140-character text posts couldn’t handle the flood of traffic.

I read the frustrated tweets of would-be iPhone 4 pre-orderers pointing blame at Apple or AT&T for their seemingly futile purchase attempts. A few “I got it” posts lightly peppered the stream keeping the army of die hards’ hopes up.

AT&T got their act together after about 30 minutes, but even after getting to the very last click I closed the tab and continued to try through the Apple store. “Surely AT&T would F it up somehow,” I reasoned. I got to the last click many times on Apple.com only for it to sit and finally timeout. After about 1-1/2 hours of this circus I just gave in and completed the pre-order through AT&T. No problem at all. I figure the worst that can happen is I’ll have to wait a day or two extra. Of course, there is a high likelihood that Apple.com and AT&T will use the same fulfillment center since the phones come pre-activated, so there may be no difference which site you order from.

Despite what’s being reported, my feeling is that Apple knew it was impossible for the online pre-ordering to go smoothly initially. It’s like all the people leaving a sporting event at the end of the game. Sure, the facility plans the best they can, but in the end it’s always pandemonium that ultimately works itself out over time. There’s probably some formal name for this, but for now I’ll call it Doug’s Funnel Theory. If you overfill a funnel, the excess will overflow and miss the target, but some will make it to the destination. As the flow eventually tapers off and reaches the proper rate, everything makes it. I guess it’s more of a Law than a theory…

For the majority of Internet users that have no idea of how it works, I guess the process was broken. The reality is that it was probably working as designed.

A few days ago I posted my intention of dumping Nokia in favor of the new iPhone 4. Nothing has changed. However, Apple’s announcement of the iPhone 4 details has stirred up much debate and comparison to the upcoming Nokia N8. The thing that strikes me in those discussions is the comparison based on pure specs. The problem is that specs only tell part of the story. I bet that even my N97 would hold up well if you compared the specs to an iPhone. For example:

The better argument would be user experience. Pick up an iPhone and the experience is as smooth as butter. Pick up an N97 and you think you’re in hell. I have little hope that the N8 will fix all of the issues I have with the N97. I don’t want to be sitting waiting for the next firmware update hoping it will fix whatever issues I have.

I have been a Nokia lover since first seeing the N95. I loved that phone. There was nothing else like it. I am really sad that I have to jump ship. Of course. I’ll be glad to return if Nokia gets it act together.

Giving up on Nokia and going with iPhone 4

I have finally had it with Nokia and will be ordering an iPhone 4 on June 15th. Now, I love the openness of Symbian and hate the closeness of Apple. However, this (apparently) means I’m supposed to live with poorly designed hardware and software in my N97: terrible keyboard, flash bleeding, sluggish OS, memory issues, etc. After seeing what Apple is bringing with the iPhone 4, I have finally woken up. I honestly have little faith that the N8 will be everything I need it to be. There. I’ve said it.

The only reason I’ve truly been sticking with Nokia and Symbian is its ability to do WiFi tethering. However, now that AT&T has officially embraced tethering–albeit USB or bluetooth only–, that reason is less compelling. So now the only thing I’ll really miss when I get my iPhone 4 is the ability to tether my iPad to my phone. *BUT* I think that there is little reason for Apple not to approve a WiFi tethering app.

So long Nokia…it’s been nice knowing you. sniff sniff

Got tired of waiting for the Acer 1825PT. Found the HP Touchsmart TM2 convertible tablet for just $709 plus tax using a $150 instant off and a $250 coupon code. Looks very sweet and supposedly better build qualities compared to 1825PT.

If you don’t know about these type of notebooks, the screen swivels around and closes so you can use it like a tablet. It has both a capacitive layer and active digitizer, so you can use your fingers or a pen stylus for input. Sweet!

Doesn’t have multi-touch trackpad, but I guess I can live without that since the screen has multi-touch. This puppy will replace my aging Motion Computing LE1700, which I’m hoping will fetch a good sum on eBay. Price seems like a steal for this baby. The deal even includes two batteries! Can’t wait. It will be my first Windows 7 machine as well as my first 64-bit OS. It won’t be my main machine so it should be a good way to figure out what I’m in for as far as 32-bit incompatibilities go.

Not sure when the deal expires, but here’s the discount info from techbargains.com:

The TouchSmart tm2t features a capacitive touchscreen enabling touch control using your fingers or a digital pen. The screen twists 180-degrees and folds down for display only use.