Broke down and bought an iPad! Road Test Results.

“The force is strong with this one” –Darth Vader

I was pretty much convinced that I was not going to get an iPad and was instead going to wait for a full Windows version. It just seemed too limited in what you could do. However, I saw a Youtube demo of a Windows Remote Desktop Protocol (RDP) app called iTap RDP and it pretty much made me run out and get one.

If you don’t know, RDP is a feature of Windows that lets you remotely log into one and control it just like you were sitting at that computer. (Note: Only the advanced versions of Windows has it.) There are several RDP apps, but I chose  iTap because it seemed to be the only one that transferred the audio as well to the iPad.  (On a side note, apps that use actual Windows RDP are superior to those that don’t. Basically the others, like Logmein and VNC draw the display like they are playing a video. This takes a lot of resources. RDP in contrast operates at the OS level and draws the interface object by object, which is much faster.) iTap RDP is awesome! The way it uses multi-finger gestures is genius and makes it so easy to use. The darn thing even works decently on my iPod Touch!

I was wondering how iTunes was going to handle syncing multiple devices (i.e., my iPod Touch and iPad) to the same machine, but it treats each one separately like you would expect. A nice surprise was that apps that I already purchased for my Touch can be synced to my iPad without re-purchasing. I had expected to have to buy new copies for my iPad. Nicely done Apple!

There have been some reports that the iPad does not charge when connected to some USB ports. While I found this to be true when connected to my USB hub, even though it has an AC adapter, I’ve found that once it hits sleep mode, it charges nonetheless. It’s only when it’s plugged in and fully powere up that it says it is not charging. Not a big deal IMHO. 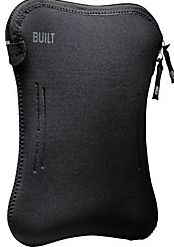 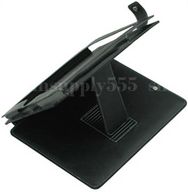 Apple was out of the official case and I’m kinda glad based on the reviews I’ve read. I went to Staples and ended up getting the Built NY Netbook Sleeve to just protect it when I put it in my backpack. It’s a pretty nice and snug fit and at $21 much cheaper than official iPad cases. I also got the one on the right off eBay. Only $20.

I took my iPadOn a recent business trip. I tethered it to my Nokia N97 via WiFi using Joikuspot. RDP performance over the 3G connection was surprisingly acceptable with iTap. Typing on the large touchscreen keyboard is very easy and fast. Sure, not physical keyboard speeds, but pretty fast.

Something that I didn’t expect was how heavy the iPad is. You can’t really hold it in one hand for very long. For extended use, you’ll need to prop it up in your lap–just like in the ads.

It was awesome watching videos on it during flight. However, one thing that is oddly missing is the blue “watched” dot for videos. On my iPod Touch, when you list videos there is a small dot that indicates if you haven’t watched the video or if it’s partially watched. It doesn’t show if you’ve finished watching it. iTunes has the same dot. For whatever reason, the iPad only shows thumbnails of the videos, but no blue dot! That’s crazy if you have a bunch of TV shows loaded, all in various states of being watched or not. It appears to not even track it because, even when I sync to iTunes, the blue dot in iTunes is not updated. Stupid move Apple.

The Built case mentioned above has worked fine in my backpack. I just got my other eBay case, so I haven’t really had the chance to put it though its paces. It is very similar to one I use for my iPod Touch. which I love, so I have high hopes.

Do I think the iPad can replace my laptop? No way. It just doesn’t do enough and RDP, although fast, is still much slower than using a real PC. Does it replace my iPod Touch? Again, no. It’s too big for quick portable use. Will it accompany me on my next trip? Definitely! It’s wonderful for watching videos and passing the time at the airport or in my hotel room. To sum it up, it replaces my iPod Touch is cases where I don’t need to pull a portable Internet device out of my pocket.

I caught a cold and tried to use the iPad while lying in bed. Forget it. The beast is too heavy. Had to go back to my iPod Touch. It was fine propped up in my lap of course.