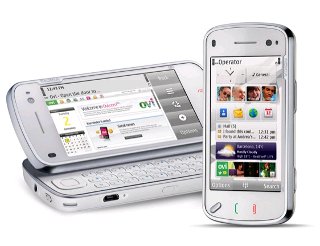 I’ve been playing with my new Nokia N97 and am so happy I stayed with Nokia and didn’t venture off to iPhone or Palm Pre land, or even N900. It’s an awesome device. I LOVE THIS PHONE!

I just upgraded to the v20 firmware. The phone came with v12. The only major visible improvement is kinetic scrolling. This may sound like a meaningless “for show” feature, but it really does make navigating easier and more fluid. Long press of keys to get alternate characters is nice.

I’m sure there are a lot of N95 owners, like me, wondering if they should get the N97, go with the non-touch N86, or just abandon an N-series for Appleland. Well, wonder no more. The N97 kicks all other phones’ rears. I’ll try to touch on a lot of the issues I was anticipating. Happily, for the most part, my fears ended up being unfounded.

I know there has been a lot of pooh poohing the touch interface with S60 5th edition, but, generally, I think they did a pretty good job. There are a few instances where it’s difficult to navigate through an older apps UI by touch, but in those few instances you can just flip out the keyboard and use the D pad old-school style. I suspect, apps will soon adopt a 5th-ed version as some have already done.