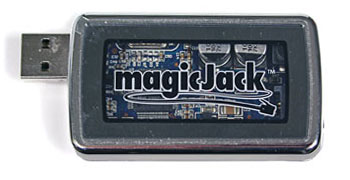 I’ve been looking for a way to ditch my $70/month land line and a neighbor made the switch to Magic Jack, so I decided to try it. Basically, you get a USB adapter that you can plug any standard phone into.

I had a heck of a time getting it to install. It’s basically like a USB thumb drive with autoboot. Initially, it installs the software, or if already installed, it runs it. If you haven’t registered yet, it brings up the Registration wizard. You select your area code and area prefix during this procedure. I kept getting this error: “An error occured while processing your request”.

I spent a couple hours trying to troubleshoot, including a hour or so with tech support using their chat. While fumbling behind my PC, I accidentally hit the power on my UPS so my PC shut off. I was already ready to quit so this was really a blessing. I decided to give it one more try and on a hunch I tried a different area code. Voila! It worked. I got a new number assigned and was making calls nearly instantly. You would think that tech support could have figured out something so simple. Duh!

Basically, it works pretty well. You can make a call on your normal phone or you can use the PC app. What it appears to do is use your phone as a remote control. Your phone gives instructions to the PC software which actually makes the call. In the beginning, it had a hard time recognizing the number 0. It does not turn the RJ11 jack on the unit into a standard phone jack. This is important to understand.

If I’m right, the device is very ingenious. The adapter basically just converts the phone button pushes into actions the PC app can understand. All the hard work is handled by the PC. This would make it much cheaper to manufacture than a full VOIP external unit that must handle all of the conventional phone to Internet conversions. The downside for Magic Jack is that you have to keep your PC on all the time and you can only plug a phone into the RJ11 jack. That is, you couldn’t plug, say, a modem into it.

Because Magic Jack totally relies on the PC app, it causes issues if you use Windows Remote Desktop and remote into this PC, which I do all the time. When Remote Desktop redirects audio to the remote client, Magic Jack thinks there is no audio device on the host PC. Since it depends on it for input/output, it won’t work, even using a physical phone. There is a workaround if you are using the standard Windows client: you can turn off sound redirection. However, this is not possible if you are using the web client. This is a deal killer for me.

I also didn’t like that it only shows the caller ID phone number, but not the name.

Magic Jack is not a terrible device. I works ok and my Remote Desktop issue is probably relatively unique. Not sure why they don’t support CID name, but guess that could be fixed with a sofware upgrade. I got a 30 day trial so I’ll only be out the shipping when I return it.

I considered adding a line to my cell phone plan and getting a cell phone docking system, but I’m going to try ViaTalk. It’s a lot more expensive than Magic Jack, but they have a $199 for two years special right now. I’ll switch to the $10/month plan when it expires. This is a traditional VOIP phone and doesn’t require your PC to be on. Just plug in a network cable and your standard phone. Lots of features and it looks much more promising. 14-day trial period, so I’ll get to try it out first.