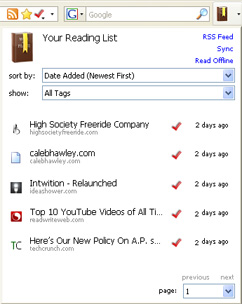 I often come across websites that I want to read later, but they don’t truly warrant adding formal bookmark. I used to use a special Temp folder for these, but it tended to grow and grow, and was a pain to maintain. Well, I chanced upon this cool Firefox extension called Read It Later (RIT). It’s basic function is to act as a temporary storage place for these one-time URLs. It sets up a nice pop-up window that not only lists the pages, but shows you the age. To add/remove to/from the list, you merely click the checkmark icon that appears in the address bar.

Even more useful, at least for me, is the integration with Google Reader. The same checkmark icon appears at the top of each entry title–right next to the star.

A Read It Later folder is also created in the standard FF bookmarks. Since I use Foxmarks, these are automatically synced to my other PCs; however, RIT also has this feature built-in if you want. It’s got a lot of other cool features and is definitely something you should check out.