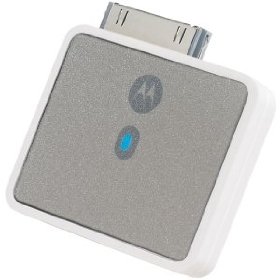 I’m totally into doing things wirelessly if possible and I’ve been using the Plantronics Voyager 855 stereo Bluetooth headset with my N95. Since my 2nd gen Touch has no BT support, I started looking at the various add-ons. Well, I stumbled upon the D650 Motorola Bluetooth Adapter on Amazon for a paltry $13.99! I saw no reason it shouldn’t work with the Touch and decided to risk the dough.

Well the damn thing works perfectly! I love it!

It’s a little weird pairing it with the headset since the adapter has no controls at all, only a single blinking light. Basically, you put the headset into discovery mode and pause your iPod on a song. Then plug the adapter into your iPod and press play. The light blinks for a bit and voila, it connects! No battery either. It gets it’s power from the iPod.

The sound isn’t as good as wired headphones, but the 855 and D650 support A2DP (Advanced Audio Distribution Profile) so its not too bad. Being wireless more than make up for any shortcomings in the quality. They also support AVRCP (Audio/Video Remote Control Profile) so I can control volume, pause and play from the controls on the headset.

Note that Amazon has the same adapter listed with a price of $14.99. The only difference I can see, other than the $1 price diff, is that the model number is 89147 instead of 89147J. I bought the cheaper 89147J. The picture shows it plugged into an old Nano.